It’s the sharpest 911 Turbo yet, and is also the best of the 992 line-up. Packed with character to match its colossal performance, the new 992 Turbo S is hard to fault 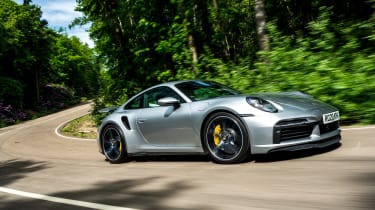 With the Gen 2 991, Porsche had already proven that despite turbocharging the 911 Carrera models it could still deliver a distinct and characterful 911 Turbo. But as the 992 Carrera models move the game on further still – more power, greater performance, improved agility etc – there’s perhaps more of a concern that a proper 911 Turbo could feel a luxury, an indulgence in a world that is perhaps shying away from such things.

On that point, those who worship at the big Turbo altar (and there remains plenty of disciples) need not worry. The new 911 Turbo S is, potentially, the first 911 Turbo to feel truly distinct, with the most overt personality since the 993 Turbo of the late ’90s. It feels like a 911 Turbo with a purpose, besides being a nice contributor to the profit line. 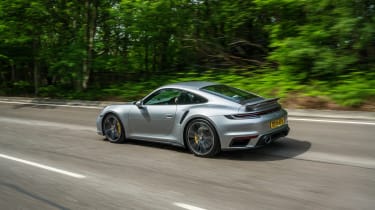 Whether it’s the single turbo that found its way onto the 1973 3-litre, the pair of blowers Porsche squeezed into the 993’s engine bay, or the water-cooled powerhouse of an engine that kept the 996 and 997 models ahead of the pack, whatever the capacity or the turbo count the engine has always been the focal point of every 911 Turbo. And the 992 is no different.

Deep down, its flat-six motor can trace its routes to the MA2 3-litre turbocharged engine Porsche fits to the Carrera and Carrera S models, but the similarities soon end. An increase in bore size from 91mm to 102mm pushes capacity to 3.8 litres. The charge-air cooling system has also been redesigned and now incorporates a larger charge cooler, while an entirely new air intake system features twice as many air intakes (four) than the previous model, increasing the flow of cooled air into the system. 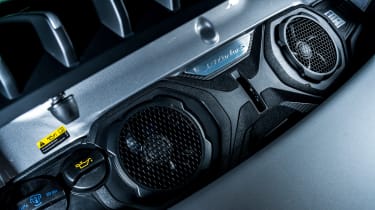 Larger variable geometry twin-turbochargers are now mounted symmetrically with bigger turbine and compressor wheels – by five and three millimetres respectively, now 55mm and 61mm – inside them.There’s also a new exhaust system to improve efficiencies when it comes to expelling gases.

It all comes together to produce 641bhp and 590lb ft of torque, which, as the case has been since 1995, arrives at all four wheels. It’s been 15 years since you’ve been able to have a 911 Turbo S with a manual gearbox and things aren’t going to change now, with the 992 fitted with the latest development of Porsche’s eight-speed double-clutch transmission. Porsche’s latest all-wheel-drive system will also send up to 369lb ft to the front axle should needs must.

What does this mean against the clock? Zero to 62mph is two-tenths quicker than it was in the 991.2 Turbo S at 2.7sec, while maximum speed remains at 205mph. 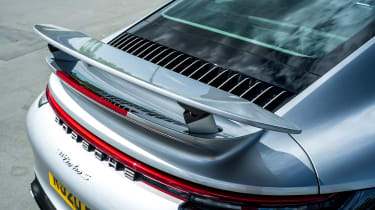 Since 2014 Porsche’s flagship 911 has been equipped with Porsche Active Aerodynamics (PAA), which are now available from 718 models through to the Taycan. For the 992 Turbo S they have been developed further.

With new active aero flaps the 991 Turbo S now features three active elements. The new flaps, one each positioned in the front air intakes, continuously adjust to provide the required level of cooling air to the engine’s radiators. Up to 43mph they manage the air flow dependent on the engine’s cooling requirement, the optimum power required by the cooling fan to do its job and also balance the aero efficiency of the aero flaps. Above this speed the new aero flaps remain tightly closed except in extreme circumstances when more cooling is required. 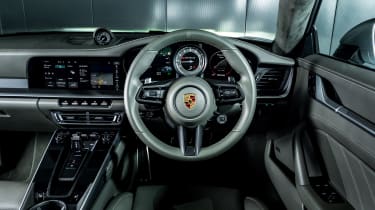 Above 80mph, however, the flaps begin to reopen to balance the aero requirements, although priority is always given to the car’s dynamic performance, therefore when Sport, Sport+ or Wet mode is selected, or when the traction control is switched off or the spoiler raised, the flaps are fully open.

Additional aero improvements include a larger effective area for the adaptive front spoiler to work with, which also benefits from improved operating times. The active rear wing, which weighs 400 grams less than on its predecessor, has an eight per cent larger surface area than before. Porsche has also increased the number of operating positions, with ‘eco’ allowing the wing to be in its most drag-efficient position over a wider speed window to improve fuel consumption. ‘Performance II’ position has a reduced angle of drag above 161mph, therefore reducing the load on the rear tyres and preventing the need to increase the tyre pressures. The third new position is when the Wet driving mode is selected, where the wing is fully extended but with no angle introduced, resulting in increased rear-end stability.

Porsche has also fitted an air brake to the new 911 Turbo S that’s activated when you need to call upon the stopping power of its standard-fit 410mm (front) and 390mm (rear) carbon-ceramic discs, which now feature ten-piston calipers on the front axle, along with 20-inch wheels and 21s on the rear. Porsche’s active suspension is standard, so too is rear-axle steering and dynamic chassis control. 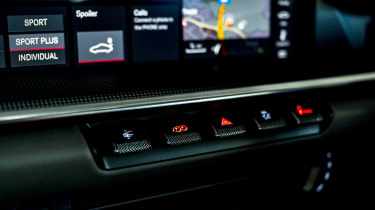 It’s unheard of to launch a 911 Turbo S off the line and not to be attacked by every superlative cliche referencing speed and acceleration. But this 992 Turbo S generation is something else, blending near subsonic GT2 RS performance with the surefootedness and confidence that Turbos have always offered. Well, the four-wheel-drive cars at least.

It’s easy to focus on the straight-line speed, so savage is the Turbo S when you select launch mode and let it go. With 641bhp and 1640kg there are more powerful and lighter cars out there, but it’s how the S gets off the line that has you tightening your grip as your cheeks flap around your chops no matter how tightly clenched your jaws are. This easy access to instant speed has most recently required you to be behind the wheel of a McLaren product. Woking’s elite still defy the laws of acceleration, but the Turbo S isn’t far behind.

Where the 992 Turbo S stands out beyond its ability to deliver you 200 metres further down the road in half the time than you had initially anticipated it would take, is how it deals with sections of roads that aren’t arrow-straight. 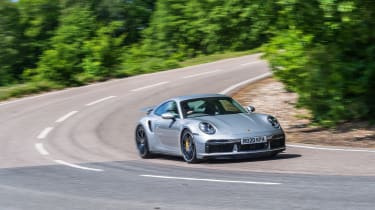 For all the brutal performance Porsche has extracted from its new Turbo it has also installed a deep layer of finesse to the car’s powertrain and chassis. Energy continues to fizz through it but it’s no longer at the cost of only being able to exploit the performance generated when the circumstances present themself.

The increased capacity of the Carrera-based flat-six provides the new Turbo with a crisper, more reactive throttle response. It renders any lag unnoticeable and the uncomfortable wait while the PDK gearbox shuffles down the ratios after a heavy prod from your right foot is all but eradicated.

Its chassis also no longer pummels the surface into submission, rather it behaves in a more linear fashion as it reacts to your inputs. It doesn’t float across the tarmac like a McLaren, but its composure and the reassurance and confidence this brings highlights how much of a fight the previous-generation car could put up when asked to do the same. The new Turbo very quickly makes its once unbeatable predecessor come up short. 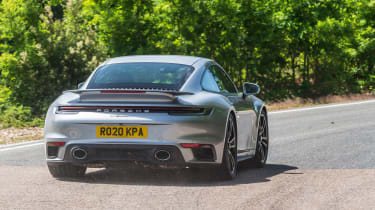 There’s more control and texture to the steering, allowing you to get into, through and out of the corner both quicker and more smoothly. It’s more settled than before across inconsistent cambers, is less prone to being distracted by crowns in the road and no longer thumps across expansion joints. And despite those gargantuan 21-inch 315/30 rear tyres you can hear yourself think across harsh road surfaces.

Fewer, if any, multiple inputs are needed to coerce the 992 through an apex, it’s calmer in its feedback when you push it and more confidence inspiring as a result. Which of course means it’s much quicker across the ground than you’re expecting, despite the badge on its tail. It’s a 911 Turbo S that converses with you in a way none of its predecessors has been able to do.

In essence it feels like a 911 Turbo that has found its character and somewhere to park in the 911 hierarchy. Over the last decade or so the constant evolution of the Carrera line-up and the focus placed on the GT models has left the Turbo a little lost. It always had the performance to match the latter but has occasionally come up short compared to the engagement and finesse of both. If you owned a Carrera GTS and wanted a step up but a GT3 wasn’t your bag, the Turbo for many offered the performance leap but brought little else to the table to warrant the cost.

Now, however, the Turbo feels a natural step up from the Carrera line-up for those who don’t want the cut slicks and wings of a GT car. It offers a clearer, more distinct character and experience that others in the line-up can’t match. And even though we’re awaiting the arrival of the new Carrera GTS it’s unlikely to get close to the newfound all-round ability and agility of the new 911 Turbo S. It’s the most complete of its type in the model’s 45-year history. 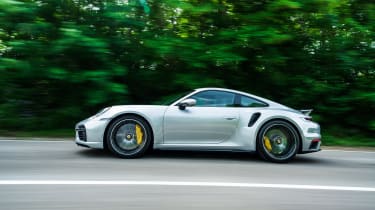 At £155,970 the new Porsche 911 Turbo S remains a unique proposition. No other comparable supercar offers the practicality of its 2+2 configuration, and while others have higher power outputs, the on-road performance is less obvious. McLaren’s 570S, whose hybrid replacement has been delayed until 2021, is cheaper at £149,000, but the Porsche is closer in performance to the £208,000 McLaren 720S, although used examples of the former eCoty winner are also similar in price to a new 570S. Audi R8 Performance, Honda NSX, Aston Martin Vantage and AMG GT R are all cheaper than the 911 Turbo S, but are all two-seaters and will struggle against Stuttgart’s latest bad boy.

Porsche has revealed its lesser 911 Turbo, but it’ll still do 62mph in 2.8sec
Visit/porsche/911-turbo/202379/new-porsche-911-turbo-gains-lightweight-and-sport-packages 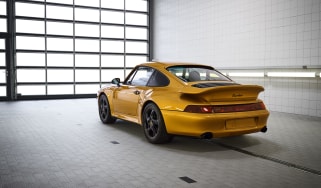 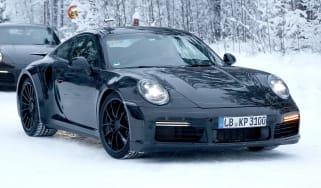 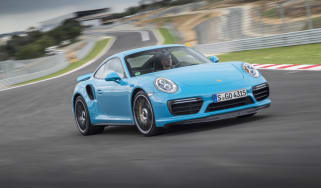 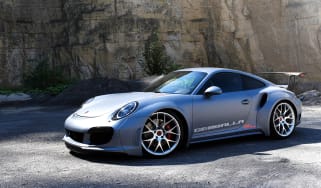 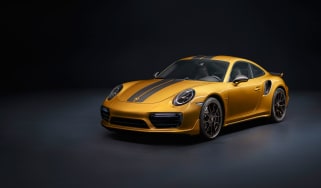 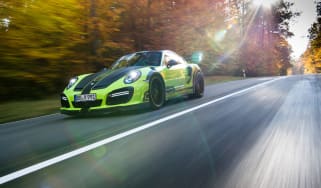 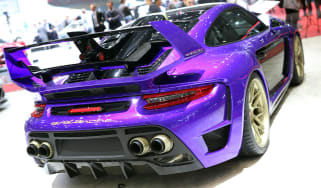 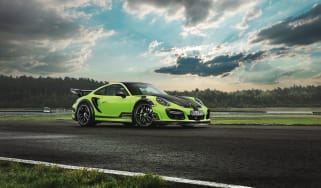 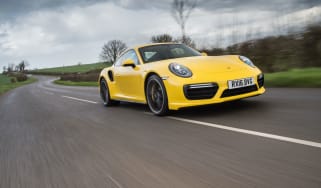 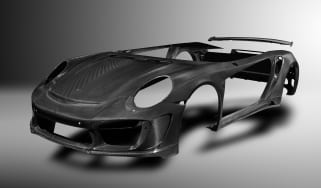 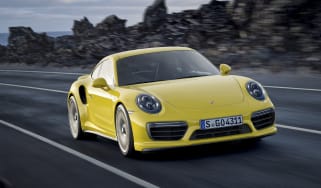 First and last Porsche 930 ‘Flatnose’ going under the hammer

Think the 911 GT3 RS is Porsche's 911 flagship? The performance of the Turbo S may make you think twice
Visit/porsche/911-turbo/15154/porsche-aerokit-for-911-turbo-and-turbo-s-pictures-and-details 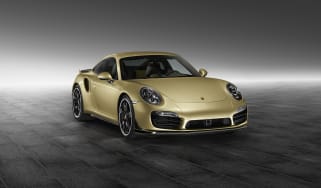 Porsche Aerokit for 911 Turbo and Turbo S – pictures and details 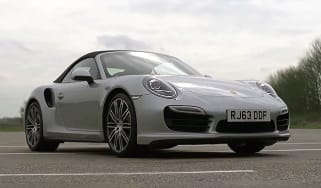 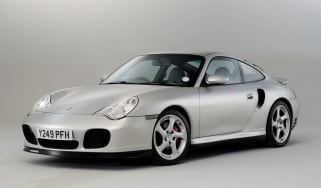