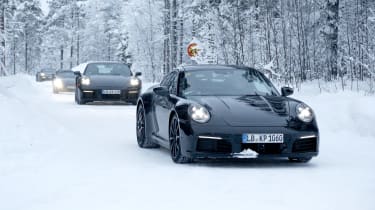 More spy shots of the next generation Porsche  911 Turbo have surfaced following our first round of images of the all-weather supercar. We can glean a few more aesthetic details from the latest prototype spotted in colder climes.

The rear-profile shows the biggest changes from the previously spied prototype. The fixed rear-wing, a fixture on past Turbos returns, while dual-exit, twin-exhaust arrangement replaces the dual-exit single-exhaust setup. Otherwise, no perceptible changes to the wide-bodied 911 have made, with squared-off bonnet remaining.

Judging by these images, the next 911 will probably do without any shocking changes to its aesthetic, rather the new car will focus on modernising the 911’s detailing without straying too far from Porsche’s comfort zone. At the front, the grille openings look to be shared with standard 911 prototypes that have already been spotted, expect these to be changed for production. Like those other cars, the Turbo will also adopt a new square bonnet, a detail Porsche has tried (in vein) to hide by sticking on fake rounded shut-lines. 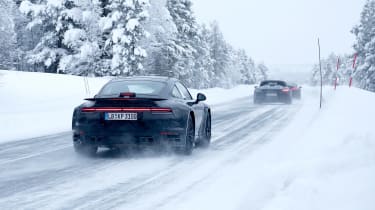 More dramatic styling changes look to be focused around the rear of the car, where Porsche will integrate a full-width light bar, much like the one on the other models in the 911 range. Above the slim LED lights sits the same wide active rear spoiler as seen on other development 911’s, but it remains to be seen if the upcoming Turbo will have a taller re-profiled unit like the one on the current car for that extra bit of visual distinction.

Any details regarding drivetrain specifics have yet to be released, or even alluded to by Porsche, but the combination of a twin-turbocharged flat-six engine, all-wheel drive and a dual-clutch PDK gearbox will all feature.

As in the standard 911, bigger design changes are likely to be seen in the Turbo's cabin. The new car will adopt the same 12.3-inch infotainment screen rapidly being spread throughout the Porsche range. This will be paired with a central analogue rev counter flanked by further driver information screens. In order to fit all this new digital real estate inside, expect the dash to have a horizontally biased design along with a removal of the old car’s myriad of physical buttons.

Generally revealed around 18 months after the standard 911, we still have a while to wait for this next-generation Turbo. The usual Porsche scheduling would point towards a reveal time at the end of 2019. 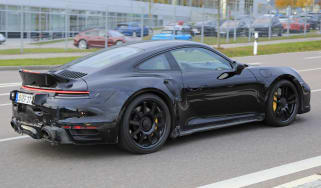