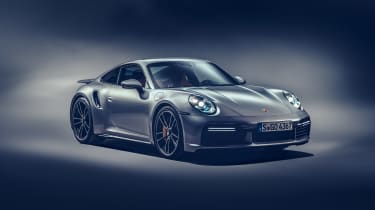 The new Porsche 911 Turbo S has been spotted testing in varying disguises for the last two years or so but it’s finally here, the all-new 992 911 Turbo S, the most potent of this generation of 911. Porsche has yet to reveal the full specification but from what we now know it looks like it’ll be on to another winner.

The 992 Turbo S features a new engine, albeit loosely based on the MA2 3-litre unit found in the Carrera and Carrera S models, but it now displaces 3.8-litres and develops headline figures of 641bhp and 590lb ft of torque, that latter figure available from 2500 to 4500rpm, which represent gains of 69bhp and 37lb ft over the outgoing model. Straight line performance is improved over the old Turbo S, 0 to 62mph taking just 2.7sec (an improvement of 0.2 sec) while its 0 to 120mph time at 8.9sec is a whole second faster than the 991 generation machine. Top speed remains the same at 205mph. 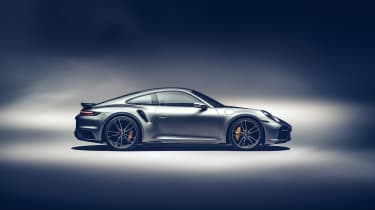 Extensive changes to the flat-six engine have been required to deliver what Porsche calls the largest leap in performance ever achieved in the history of the 911 Turbo. The charge-air cooling system has been redesigned and incorporates a larger charge cooler while an entirely new air intake system has increased the flow of cooled air thanks to four air-intakes. The variable geometry twin turbochargers are larger than before and are now mounted in a symmetrical layout with turbine and compressor wheels that are five and three millimetres larger respectively.

As expected the only gearbox option is the eight-speed PDK, which has been optimised to suit the characteristics of the new engine. An enhanced version of Porsche’s Traction Management system is also fitted and the transfer case is now capable of distributing torque more efficiently to the four driven wheels, with up to 369lb ft of torque now capable of being sent to the front wheels if required. 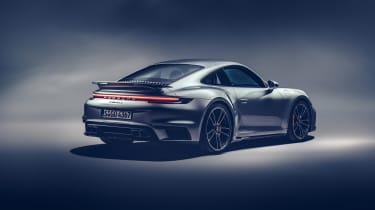 Naturally enough the underpinnings of the new Turbo S have been honed and enhanced and features a track that’s 42mm wider at the front and 10mm wider at the rear. The Turbo S features the latest incarnation of PASM which Porsche says offers faster and more precisely controlled dampers to the benefit of body roll, steering behaviour, suspension control and tyre grip. And those bespoke tyres – 255/35 up front and 315/30s at the rear – are fitted to mixed wheel sizes for the first time on a Turbo S, 20-inches at the front and 21s at the rear complete with a new design and centre-lock fittings. Braking is taken care of by Porsche Ceramic Composite Brakes whose discs are larger than before and are clamped with 10-piston calipers.

Externally there are plenty of clues that you’re looking at a Turbo S, not least its hips which are 20mm wider than before at 1900mm and house the trademark air intakes. Further-honed aerodynamics include a pneumatically-extendable front spoiler along with controlled cooling air flaps in the nose while at the rear there’s a neat single plane spoiler that rises at speed to aid stability. In comparison with the previous generation Turbo S Porsche says it delivers 15 per cent more downforce than before. A quartet of high-gloss black exhaust tips complete the visual package. 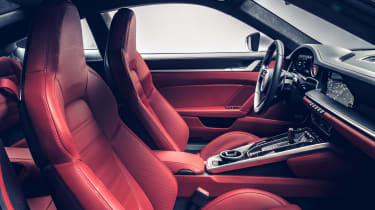 Inside the Turbo S will be familiar to anyone who has sat in a 992-generation machine but with enough small flourishes to remind you this is the range-topping model. There’s plenty of ‘Turbo S’ scripts on the instruments and on the door sill kick plates while the stitching on the 18-way electrically adjustable leather seats pays homage to the original 930 Turbo. There’s plenty of standard equipment such as the 10-9-inch PCM screen, GT sports steering wheel, Sport Chrono package and Bose surround sound system. There will be plenty of options to choose from – it’s a Porsche after all – and these will include a 10mm lower sports chassis set up and for the first time on the Turbo S a sports exhaust system.