Is a standard Porsche 911 Turbo S a little subtle for you? Gemballa can help... 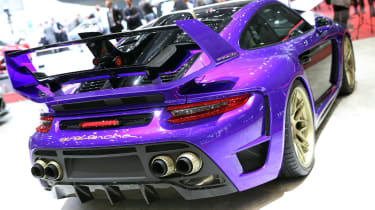 Most Porsche owners are very happy with their cars as they left the Porsche factory, but there’s always a few who would like something a little more ‘bespoke’. Luckily for those owners, there are plenty of tuning companies out there, but few make an impression like Gemballa.

The latest model from the German-based Porsche specialist is the new Avalanche - a 911 Turbo S-based supercar making its debut at this year’s Geneva Motor Show.

Now on its third generation, the Avalanche builds on the current car’s bi-turbo flat-six, lifting power from 572bhp to a slightly insane 796bhp. Torque has also been increased to 700lb ft from an already stout 516lb ft, so it’s a pretty fair guess that the Avalanche will offer plenty of performance. However, we think that it might be the aesthetics that will draw in the crowds..

> Click here to read our drive of the 911 Turbo

The most obvious change is the massive rear wing Gemballa has added. Giving new meaning to the term pram handle, it sits alongside a whole suite of styling changes that vary from unsubtle to outright challenging. An intake scoop has been secured to the top of the rear screen to divert air towards the 3.8-litre six. 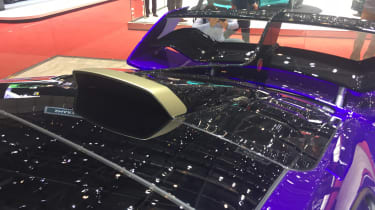 As well as a wing seemingly pinched from the underside of a hydroplane, Gemballa has installed a huge quad exhaust system - reminiscent of the exhaust ports of a fighter jet - alongside redesigned bodywork and aggressive rear diffuser.

The side profile is equally insane. Gold 21-inch wheels cloak the yellow calipers, indicating the presence of Porsche's carbon ceramic anchors, all contrasted by the purply-blue hue. The black doors are inset into the body, creating a crevice in the rear-quarter to funnel cool air to the brakes. Copious smatterings of carbonfibre are never far from sight.

Out in front - 62mm wider than standard - the Avalanche’s front lid is seemingly inspired by the Corvette Z06, with a carbon hump giving owners a bit of extra space to store their ego. Red luminous lettering spells out the Gemballa logo.

The company believes the Mad-Max style Porsche is a finely sharpened track tool, yet doesn’t hold back on the luxury. 'The opulence of its interior, and its dynamic driving capabilities ensured Gemballa’s Avalanche was in a category of its own in the new field of personalised supercars', is how the company puts it.