Porsche has revealed its lesser 911 Turbo, but it’ll still do 62mph in 2.8sec 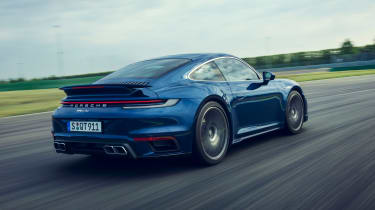 The new 992-generation 911 Turbo S has been grabbing headlines with its 641bhp power figure and constant drag battle wins for a few months now, so in order not to lose that wave of good press Porsche has revealed the lesser 911 Turbo in both coupe and Cabriolet forms.

In non-S form, the 911 Turbo shares the same basic drivetrain package with the S, combining a 3.7-litre twin-turbo flat-six, an eight-speed PDK dual-clutch transmission and all-wheel drive. Peak power is rated at 572bhp, with a peak 552lb ft of torque, a fairly substantial 69bhp and 38lb ft drop compared to the Turbo S. These figures are still 41bhp and 29lb ft up compared to the previous 991.2-generation Turbo though. Performance is still mighty, with 62mph coming up in 2.8sec and top speed at 199mph (0.1sec and 6mph behind the S).

In order to reach those outputs, the Turbo shares much of the Turbo S’s trick engine tech, including twin symmetrical VTG turbochargers that adjust the amount of boost produced based on engine speed and load. There’s also a redesigned charge air cooling system to keep everything cool, while electronically controlled wastegate bypass valves, piezo fuel injection and a fundamental redesign of the engine’s breathing to make the turbos spin in opposite directions all improve response and keep the engine revving freely right to the red line. 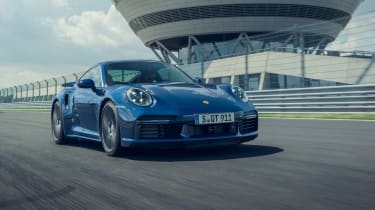 As well as the power deficiency, the Turbo also loses the standard-fit PCCB ceramic brake package, but unlike Turbo versions of the Panamera, Macan and Cayenne, runs on cast iron discs, rather than Porsche’s mid-level ceramic-coated items. It also loses the Turbo S’s hydraulically activated anti-roll stabilisation system in favour of a passive system, but does still include Porsche’s PDCC adaptive damper set-up as standard.

The Turbo keeps hold of the clever dynamic rear wing and front splitter too, the former transforming its shape depending on speed and selected drive mode. This not only cleans the airflow around the 911’s nose, but also balances out the active rear wing to keep the car stable at the high speeds it’s so very capable of.

In terms of convenience features and styling, the Turbo loses its Matrix LED headlights in favour of passive units and also its centre-lock wheels, but keeps hold of the Sport Chrono package, electric seats and 10.9-inch digital interface. In typical fashion the options list is vast, but alongside the Turbo’s release, Porsche has also announced a couple of new option packages – Lightweight Design and Sports. 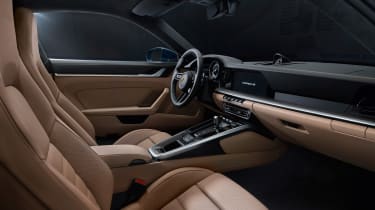 Both packs reduce the Turbo’s kerb weight by a further 30kg with the fitment of lightweight bucket seats, the removal of the rear seats and a reduction of interior sound deadening. Add the Sports package on top and a selection of black and carbonfibre design elements will be fitted alongside a darkened rear light bar, while the standard Turbo’s brightwork around the engine cover and window surrounds will be removed.

An obvious plus as a result of the removal of standard equipment is the Turbo’s lower price point which sits at £134,400 for the coupe and £143,560 for the Cabriolet. This represents a £21,570 reduction in price compared to the Turbo S variants, but one sure to disappear if you dip into the options list. The new 911 Turbo is available to order now in the UK, with cars reaching customers in the next few months.

It’s the sharpest 911 Turbo yet, and is also the best of the 992 line-up. Packed with character to match its colossal performance, the new 992 Turbo S…
New Porsche 911 Turbo gains Lightweight and Sport packages

The 2020 Porsche 911 Turbo hasn’t been with us for long, but a raft of packages and optional extras are already in the pipeline