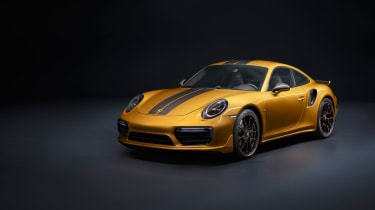 Porsche has revealed a new, even more powerful version of its ballistic 911 Turbo S. The new model, called the Turbo S Exclusive Series, has 599bhp, 27bhp more than the regular car, has been limited to just 500 models and costs £186,916.

The Exclusive Series has the same basic engine as the Turbo S, the 3.8-litre flat-six engine with forced induction generated by two of Porsche’s Variable Turbine Geometry (VTG) turbochargers. The extra 27bhp that the new car has is not matched by any extra torque, oddly. Just like the standard car, the Turbo S Exclusive Series produces 553lb ft of torque between 2250 and 4000rpm.

> Read our review of the Porsche 911 Turbo

The increased power doesn’t translate to an improvement in Porsche’s claimed 0-62mph time; it remains a ludicrously fast 2.9sec. The extra power, however, does make a difference as the speed increases as the Exclusive Series can go from 0 to 124mph in 9.6sec, 0.3sec faster than the regular car - just what you'd expect from a car with nearly 600bhp.

How do you make a #Porsche 911 Turbo S Exclusive Series? Spoiler alert: it takes a lot longer than 17 seconds! Read more...

The chassis of the Exclusive Series has been left unchanged, but that’s hardly an issue when the standard 911 Turbo S has four-wheel drive, adaptive dampers, active anti-roll bars, rear-wheel steer and carbon ceramic brakes.

The upgrades to the 911 Turbo S Exclusive Series aren't limited to just an extra bit of power, it also has a unique look to differentiate it from the rest of the Turbo range. Most obviously is the new metallic gold colour the exterior is finished in. However it isn’t the only colour you can choose, Porsche has selected a range of other exclusive hues too.

On the Exclusive Series the paint doesn’t cover the entire car - two stripes along the roof and bonnet have been left unpainted exposing the weave of the new carbonfibre bonnet and roof. At the rear of the car is a new rear diffuser, black stainless steel exhaust tips and a carbonfibre intake scoop on top of the rear deck lid. 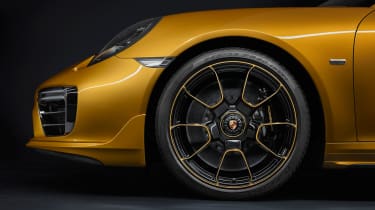 A set of 20-inch black wheels with matching gold highlights cover the Porsche Ceramic Composite Brake (PCCB). But unlike the trademark yellow colour that all PCCB calipers are painted, the Exclusive Series’ brakes are black and finished with a golden Porsche logo.

Inside the same colour scheme continues with leather seats and an Alcantara roof lining in black, with contrast stitching and embroidery in gold. The traditionally black carbonfibre trim has been brought into the theme with a fine copper thread being incorporated into the weave.

The Turbo S Exclusive Series is also available with a selection of accessories, including a luggage set that fit perfectly into the Porsche’s storage areas and Porsche Design chronograph watch finished to match the car.