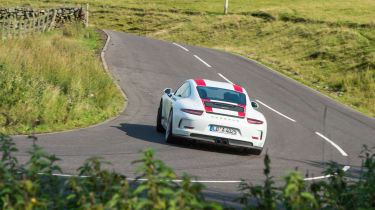 On paper the Porsche 911 R is a GT3 with a manual gearbox, the GT3 RS’s engine and no wing. However, the philosophy behind the car is a little more involved than that. This is meant to be a really pure, emotive 911, a car that is about driver involvement on the road rather than the track.

The engine is the glorious 4-litre, naturally aspirated flat-six, lifted straight from the 991 GT3 RS. The gearbox, however, is new and is arguably the R’s single biggest selling point. It is a six-speed manual that uses the casing from the RS’s PDK (and the Carrera’s seven-speed manual) but with new internals. Owners will also have the option of specifying a lightweight single-mass flywheel – they really should.

Power and torque outputs remain the same as in the RS, so 493bhp at 8250rpm and 339lb ft at 6250rpm. There are fewer losses through the transmission with the manual ‘box so in one respect the outputs are even stronger, however the R doesn’t have the RS’s side intakes capable of producing a ram air effect at higher speeds. 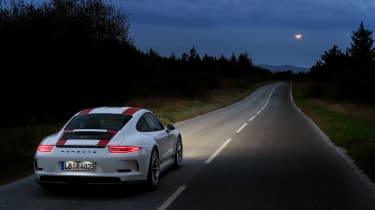 The claimed 0-60mph time is 3.8sec and the claimed top speed is 201mph although we suspect the latter (and quite possibly the former) is a somewhat conservative claim.

There has been plenty of weight saving in the 911 R and the end result is a kerb weight of 1370g (1250kg dry) – some 50kg lighter than the RS. The new gearbox saves around 20kg over the PDK straight away, then there are new carbon fibre front wings, and some 4.5kg of sound insulation has also been stripped out. Porsche’s Carbon Ceramic brakes come as standard and you can have it without air con and a radio. If you spec the lightweight single-mass flywheel, that should save another couple of kilograms too.

Rear-wheel steering remains for the vastly improved agility that it brings, but with a completely different calibration of the response curve. With no rear wing a new diffuser has been fitted at the rear to help stability at high speeds on the autobahn.

With less sound deadening, the engine seems to fill the cabin beautifully when you start it up, neither too loud nor too quiet and with a deeper more guttural noise than an RS. Stop at some traffic lights and you can hear the reassuring rattle of the single-mass flywheel. The manual gearbox means you often opt not to shift, relying on the torque, enjoying the deep sound of the mid-range. Rev the wonderful 4-litre motor all the way to the limiter though and you are treated to the most glorious tearing, yowling, slightly metallic top end. It is a furious rush.

Revving so incredibly freely, you need to be on your game to finesse the gearshifts between ratios smoothly, but that’s just the way it should be. You can press the Sport button to help you ease between the shifts with the rev-match software, but that feels like cheating. The gearshift itself is lovely. Not overly short, but perfectly precise, deliciously weighted and much better than the seven-speed. You can enjoy it whatever your mood, but flashing it through several down-changes in quick succession, revelling in the response when driving hard is the stuff to send tingles down the spine. As ever, Porsche has placed the pedals perfectly.

Despite the Cup 2 tyres and 493bhp, this really is a 911 that you can drive and enjoy at sane speeds. It definitely feels lighter and shorter than any other 991. Crucially it also feels more like a 911, with the capacity to subtly move with a road in the way that a rear-engined car should. Push harder and some of this nuance actually recedes, leaving you with devastating composure and huge reserves of grip. The traction is immense and you have to be trying very hard indeed to unhook the rear tyres in the dry. Wet roads reveal a beautiful balance over the limit, the rear easily held just on the edge of grip and then pushed over only when you want. The steering is extremely good for an EPAS system too, but if we’re being really picky (and honest) we do still miss the wonderfully granular messages that the old hydraulically assisted steering used to relay from the front end of a 997 GT3 RS. 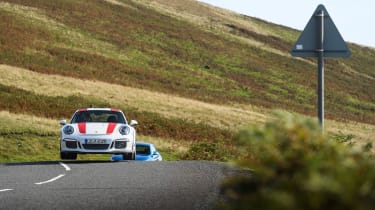 Although it’s not really a car for the autobahn, when we did happen to find ourselves in Germany on a derestricted stretch, the 911 R was hugely impressive. Without a rear wing, care is needed through fast bends as it doesn’t feel anything like as locked down as an RS, but the upside is that it slips through the air very very easily in a straight line. The way the engine pulls at the top of each gear is astonishing and we nudge an indicated 200mph with the R still pulling hard in sixth…

It really is a very special car to spend time with. You probably never doubted that it would be, but it’s been intriguing to find out what sort of 911 it is. The huge grip and impressive usability still mark it out as a 991, but there is also more lightness, character and subtlety to the way it handles than before. The highlight though is undoubtedly the way that the manual gearbox gives you so much more interaction with the incredible engine. Porsche has done absolutely the right thing by championing three pedals. 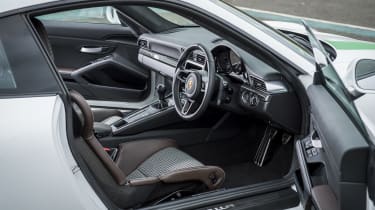 Finding the asking price of £136,901 isn’t really the issue with the R. If your name wasn't on the list for one of the 991 made, then you didn't get one new. Now, to get your hands on an R you'll have to pay a significant premium. It’s a shame, but that’s the market.

The good news is that the new 911.2 GT3, that goes on sale this year, will have the same manual gearbox that was fitted to the R. However the new car will have an improved engine over the one in the R and GT3 RS, still a 4-litre flat-six that puts out 493bhp, but the new motor will rev to 9000rpm and produce more torque. Even better is that the GT3, although not easy to get hold of, has never been a limited model, the new one is no different. Those seriously interested in buying a new GT3, then, should be able to acquire one if they're willing to endure the inevitably long waiting list.

A BMW M4 GTS is available for £120,500, but is a more track-focussed machine and lacks the crucial manual gearbox. Lamborghini’s rear-wheel drive Huracan is naturally aspirated and comes in at £155,400, but again without a manual gearbox. If you want three pedals, then perhaps the place to look is Aston Martin. The Vantage GT8 provides a wonderfully pure driving experience (complete with hydraulically power assisted steering) and is something of a steal at just under £90,000.

But it should be noted that when the 911 R went up against all three of these cars in our 2016 Car of the Year test, the Porsche came out on top and too the over all win.

You can have green or red stripes to mimic the original R’s historic colour schemes. While they instantly identify the car as an R, we would probably go without for the clean, almost Q-car look. Without any rear wing it is subtly stunning.