Born of the sublime V8 Vantage but corrupted by the GTE race car, is the new Vantage GT8 the perfect blend? 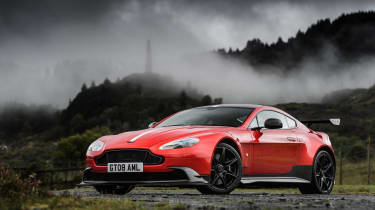 Not many road cars look at home in a genuine factory racing workshop, but the Aston Martin Vantage GT8 manages to blend in pretty well.

In fact, if you painted it white or gulf colours and slapped a few sponsors on it, I think it would remain incognito long enough to slip past security and out onto a grid. Taking cues from the GTE race version, it follows on from the Vantage GT12 in offering a more extreme, race-inspired take on the venerable Vantage range.

The GT8’s 4.7-litre V8 produces 440bhp and 361lb ft of torque, but it’s the way the engine sounds that catches your attention initially. A new, big bore titanium exhaust exits just above the rear diffuser (sadly not out of the side skirts like the race car) and Aston has taken out the secondary cats so it is megaphone loud.

The soundtrack that fills the cabin is pure motorsport, building from a rich V8 burble at low revs into something with a real hardness to its timbre once it spins beyond 6000rpm and reaches for the limiter at 7500rpm. The nice thing is that in the dry the power is of a magnitude that you would find it easy to constantly visit the thrilling upper reaches of the rev range. 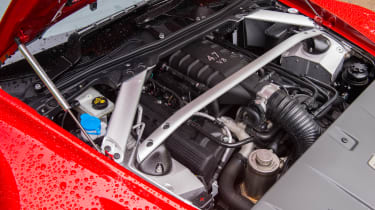 There are two gearbox choices; a seven-speed Sportshift II paddle operated automated manual or, as fitted to our car, a six-speed H-pattern manual. The gearknob looks a bit ordinary, but the short, relatively light throw of the stubby lever feels good. Given that the race car has a paddle operated sequential, you might think the Sportshift ‘box would be the racier option, but somehow the extra interaction between driver and drivetrain that you get with the three pedal option, seems to make that feel like the more appropriate choice.

Compared to a GTE car, the road-going GT8 actually looks like the more elaborately aero proposition from the front. The additional carbon pieces that appear to hang the splitter from the red bodywork have small fins, while the splitter itself is more sculpted than the completely flat item on the green race car. It’s what happens behind the GT8’s front wheels that really makes it stand out among other road car though. Like the GTE car, there are significant cut outs in the arches, allowing high pressure air to escape.

The GT8’s Michelin Pilot Sport Cup 2 tyres are indisputably designed for the warm, dry conditions, but thankfully they are progressive enough that you can still push them to the limit and beyond when water is filling the limited tread, as it was on our test. As soon as you begin to turn in to a corner, the tyres filter subtle information back up through the hydraulically assisted steering so that you know how much more there is to give, how much more lock you can add and how quickly.

With the front balanced on the edge of breaking away, you can almost tease the front tyres through longer corners at times, just making tiny, quick adjustments with the steering as the weighting of the wheel flutters subtly. The fun thing is that while you’re driving it on the nose the rear is always ready to be called into action quickly. Either a little lift or prod of the throttle depending on the situation can have the rear of the car moving, and such is the beautiful poise of the V8 Vantage with its engine tucked all the way back up under the dash that it feels like an easy, fluid transition of the load from front to rear. The ideal is to get the front tyres to the point where they are just sliding, then pick up the throttle a little more so that the rears break away too. Then, right there, balanced, you have the GT8 gliding in a genuine four-wheel drift. 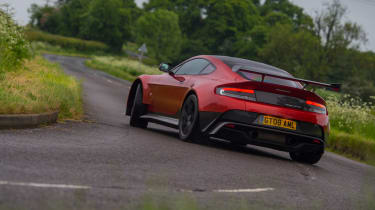 The passive damping setup is obviously calibrated to work better outside 30 or 40mph limits and with more pace you feel the car riding the road more contentedly, soaking up bumps in that transparent way that only fixed rate dampers seem truly capable of.

Just occasionally over bigger lumps I think that either a little more control is needed or the GT8 could do with losing even more weight. A saving of 100kg (with all the options ticked) over a standard V8 Vantage is good, particularly given that things like air conditioning and sat nav have been retained, but at 1510kg it is still no lightweight and it tips the scales some 265kg heavier than the minimum permissible weight for a GTE car.

And the brakes? The pedal feel is superb with a lovely progressive feeling through the travel as you increase the pressure.

The Vantage GT8 made its way onto our 2016 car of the year test. Its obscenely loud exhaust noise and pumped-up bodywork split opinion, but its old-school character charmed almost all the judges. Its final place of ninth out of 12 cars might not seem spectacular, but to be included in such a competitive year is an achievement in itself.

The Vantage GT8 starts at £165,000, or a chunky £70,000 more than a standard V8 Vantage, but the extra cost is more than justified by the race-inspired engineering. Picking rivals is difficult, because on ethos the GT8 is closest in spirit to Porsche 911 GT3s and BMW M4 GTSs, cars that sit well below the Aston’s price bracket. Though given the markup on GT3s in particular, perhaps you might consider the GT8 as an alternative.