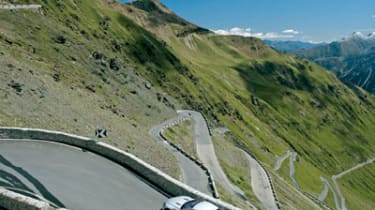 At the press conference for the new Maserati GranTurismo – a charmingly informal affair with journalists and key Maserati personnel sitting around a large table watching a slideshow from a ropey projector – it isn’t long before perhaps the most inevitable of the obvious questions is asked: which car does Maserati consider to be the GT’s closest rival? Sounds routine, but for peaking a glimpse at the thinking behind the latest episode of Maserati: The Comeback, it’s also the most important.

But before I call Rog to tell him not to bother unpacking, I remember why it’s an Aston V8 Vantage he’s turned up in and not any of the other 13 cars on the chart. It’s simply this: up to now, if you’d set your heart on a circa £80-90K old school (i.e. front engined, rear drive) high-performance coupe that seamlessly melds glamour, beauty, breeding and a hi-fi soundtrack, only the Aston put ticks in all the boxes.

In the GranTurismo, Maserati might, just might, have the accumulated firepower to hammer the Aston at its own game, something that, as others have discovered, is an incredibly hard thing to do. So, despite Maserati’s official reluctance to name a credible competitor, they shouldn’t mind that we’ve done it for them.

Raw performance and dynamic ability are important elements of the GT remit, but only part of a polished seduction technique arguably accomplished no more adroitly than by the Aston. And from the moment photographer David Shepherd and I first set eyes on the GranTurismo in Bolzano’s main square the following morning, it’s clear that it isn’t holding back. The car’s a natural show-off, a heady mélange of pumped-up curves, sucked-in tucks, blistered arches, skinned-back lights and, perhaps most dazzling of all, that enormous concave grille – a set of Hollywood nashers straight out of the Tom Cruise collection.

But it’s the cabin’s roominess and comfort that probably impresses most of all. If Maserati is to be believed, the GranTurismo has more headroom and rear leg-space than any would-be four-seater rival. And there’s little reason to doubt it. After all, the Quattroporte on which it’s based has wheelbase to spare. Up in the thin air of the demonically twisty and narrow Stelvio Pass, the summit of which is the rendezvous point Rog and the Vantage are already heading towards, the GranTurismo’s emphasis on space and comfort are unlikely to be obvious allies.

Its 1880kg kerb weight even less so. Pitted against this is a 4.2-litre V8 and six-speed ZF torque converter automatic from the latest version of the Quattroporte, with peak power tickled up to 399bhp at 7100rpm. Respectable, but hardly heart- stopping. Less heart-stopping still is the torque figure of 339lb ft at 4750rpm, which might look fine in isolation but, again, has to be considered in the context of the Maser’s generous mass. So don’t expect the GranTurismo to be much quicker in a straight line than the Quattroporte, itself not exactly a recurring nightmare for BMW M5 and Merc E63 drivers. True, the Aston packs even less muscle than the Maserati, its 4.3-litre V8 producing 380bhp, but it does weigh a handy 310kg less. That said, top speeds are about the same, the GT bettering the Vantage’s 175mph by just 2mph, and the headline acceleration stats give the Vantage only a slight edge: 5.0sec to 62mph plays 5.2.

For the hour or so it takes to drive to Stelvio, the GranTurismo’s reserves aren’t put under any appreciable pressure, but, rather like the best high-end hi-fi, you don’t have to turn it up loud to appreciate its abilities. In fact, loud isn’t really on the job list. The Italian V8 doesn’t so much erupt as ooze into life. On a light throttle it elicits nothing more than a caramel-tonsilled V8 burble – there’s only a hint of a hard centre as the revs pile on and the miles melt pleasantly away.

The prickly exuberance with which the near-identically-engined Quattroporte Automatic sprung away from rest in response to the most modest of throttle inputs when I drove it earlier this year (evo 103) has been finessed into something far more linear and relaxing, engine and transmission working together with the finely nuanced empathy of a Torvill and Dean routine. Upshifts are unerringly clean and smooth, downshifts nicely rev-matched rather than gratuitously ‘blipped’ as with some versions of the ZF software.

Endeavouring to keep some semblance of an even playing field, we’ve opted for the robotised manual Sportshift paddle transmission on the Aston – ironically the same combo of hydraulics and Marelli electronics used by Maserati in the Quattroporte DuoSelect, a gearbox option not yet available on the auto-only GranTurismo. The Maser has paddles too, of course, and I’m sure they’re about to come in useful on the Stelvio.

The eastern ascent of the Stelvio Pass, which climbs to a breathless 2757m via 48 hairpin bends, is a cruel test for any car, let alone one as extravagantly proportioned as the GranTurismo. As I attack each successive 180degree turn, steering the Maser’s broad, shapely nose as close to the edge as I dare, Shep, who has a clearer view of what’s on the way down (which, as well as the constant stream of well- behaved but essentially insane cyclists, includes everything from earth movers to original Fiat 500s) shouts ‘Clear!’ when it is and makes a loud gulping noise when it isn’t. It doesn’t make much difference, even with the Sport button engaged to make the gearshifts more aggressive, the steering meatier and the damping tauter. The GranTurismo is about 20 per cent too big for Italy’s highest pass, the thin air is becoming an all too obvious aerobic challenge and I’m beginning to wonder if the brakes, which haven’t exactly wrapped a reassuring arm around me yet, will be up to it on the way back down. But that’s good. The pressure’s on.

Rog is already sunning himself on a large rock when we reach the top. He reckons his trip up the pass was no swifter than ours, but at least he didn’t have to breathe in when coaches with indeterminate braking capacity came hurtling past in the opposite direction. He also says that changing down into first every 40 seconds or so with Sportshift was about as much fun as removing sleep from the corner of your eye with a cocktail stick.

As Shep choreographs a photographic beauty shot, I manoeuvre the Aston. Its cabin is every bit as alluring as the Maser’s but set out almost entirely in counterpoint. Contrasting with the Italian car’s spaciousness and generous, almost fleshy stylistic gestures, the Vantage is darker, cosier, firmer, more intimate and, if I’m pressed, just that bit classier. If this were a courtroom contest, the Aston would offer a cool, elegantly spare defence to the Maserati’s aesthetic showboating. Indeed, if ever there was a case for less being more, the V8 Vantage is it.

There’s much more speed to be had on the other side of the Stelvio, and a greater variety of surfaces and turns. I’m in the Vantage. After so many miles in the GranTurismo, there’s an immediacy to the Aston’s reflexes that appears to be missing in the Maser’s. At first this seems decisive, but it’s actually deceptive. A quick back-to-back on one particularly fast, open stretch near the Swiss border confirms what while, initially, the Maserati feels the slower-witted and softer-edged, if you grab it by the scruff it executes snap changes of direction with every bit as much resolve and alacrity as the Aston and – surprise of the day, this – even greater bite, damper control and overall composure.

Pushed right up to the limit – and here’s where its weight finally plants its thumbprint – the GT can feel scrappier and less fluent than the Aston, but up to that point, and as long as you remain mindful of its greater girth, it inspires just as much confidence, possibly more. And, on the standard 19-inch rims at least, ride comfort is a revelation: quiet, supple and superbly well controlled. Hitting the Sport button keeps body movements on a tighter rein but doesn’t undermine the suspension’s pliancy. The Aston feels decidedly firm and fidgety by comparison. It would take something like a Jag XK or Merc CL to give the GT a hard time in this area.

From the moment you carpet the throttle for the first time, the Aston spikes your pulse in a way the Maser never quite manages. It isn’t that the Vantage is that much faster, it’s more the way it communicates that speed to the driver. It sounds shattering in full cry where the GranTurismo is merely sonorous. And brilliantly as the Italian car handles and rides for its size, you feel a few crucial layers removed from the action. The Aston always feels more alive, more biddable, more intimate.

And this is only a hunch, but I think the Aston’s shape will still be slackening jaws long after the lure of the Maserati’s visual extravagance has worn off. Perhaps Maserati was right not to mention the V8 Vantage after all. In the GranTurismo it has made a car that does exactly what it says on the bootlid in a way only an Italian car-maker can. It just isn’t the car 007 would choose.