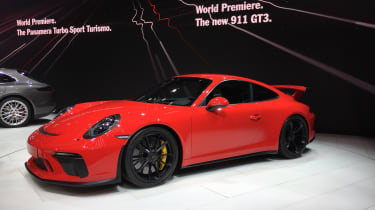 Porsche whipped off the covers of the facelifted 911 GT3 991.2 at the Geneva Motor Show with only good things to tell.

Not only were we granted a personal and close audience with the new car, but with the head of Porsche’s GT arm, Andreas Preuninger too, a few weeks prior to its Geneva unveiling.

While the video will detail all the modifications made to the latest iteration of the GT3, there are points worth reiterating here. The new GT3 will appease both the purists and lap-time chasers for the first time — offering a choice between the seven-speed PDK gearbox and six-speed manual.

Redesigned and uprated engine internals return 493 bhp and 347lb ft of torque from the 4.0-litre, up 25bhp and 23lb ft respectively on the previous car.

A longer stroke contributes to the atmospheric flat-six’s enlarged capacity up from 3.8-litres. Porsche has managed to combine the 9,000rpm redline of the previous 3.8-litre, with the torquier qualities of the bigger unit that took up residence in the 911R and previous GT3 RS which were limited to 8,800rpm.

The new GT3 will hit UK showroom floors early in the summer although getting your name on the waiting list will be no easy feat. We’re due to drive the car at the end of April, when we’ll establish if the next GT3 can uphold the reputation and legacy of infamous nameplate.