BMW M4 GTS review - more than twice the price of a regular M4, but is it worth it? 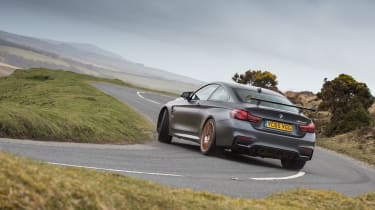 The M4 GTS is the fastest production BMW ever. With a 190mph top speed it easily outpaces almost any other BMW you care to mention, most of which are limited to 155mph.

But there’s much more to the M4 GTS than speed alone. It follows in a long line of faster and more focussed versions of BMW’s M3 coupe – including the E30 M3 Sport Evo, the E46 M3 CSL and the E92 M3 GTS – and it adheres to the same formula of more power, less weight and sharper driving dynamics.

The M4 GTS will be limited to 700 units worldwide with just 30 coming to the UK.

The standard car’s 3-litre twin turbo straight six is carried over almost wholesale, albeit with one crucial upgrade. A water injection system sprays a fine mist directly into the air chamber to reduce intake temperatures, which has enabled BMW’s engineers to turn up boost pressures.

As a result power is up to 493bhp with torque rising to 442lb ft – increases of 68bhp and 36lb ft over the base model. The five-litre water tank is located within the boot floor and in track use it needs to be refilled with each fuel tank refill.

The only transmission option is a seven-speed DCT twin clutch item, driving the rear wheels via BMW’s active M differential. BMW quotes a 0-62mph time of 3.8 seconds, but to see the full set of figures that we recorded when we had the car, pick up issue 222 of the magazine. 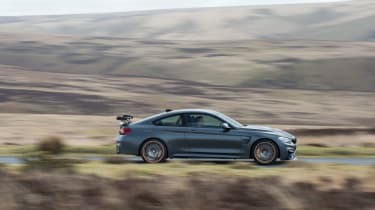 The engineers at BMW’s M division focussed their attentions on the chassis and weight reduction. The stock springs and dampers have therefore been replaced by three-way adjustable coilovers, with 16 clicks for rebound, 14 clicks in high speed compression and six in low speed compression. On top of that there’s a 15mm window of adjustment for the ride height.

The anti-roll bars are thicker to limit body roll and the suspension kinematics have been retuned specifically for the GTS, too. It all means the M4 GTS should be a much more aggressive car in dynamic terms than a standard M4, with a wide range of adjustment to allow owners to tweak their cars for specific circuits and road use. Additionally, the front splitter and rear wing are adjustable.

The tyres are Michelin Pilot Sport Cup 2s and the steering has been revised to be more immediate and direct. The standard-fit wheels are forged, lightweight items measuring 19-inches on the front axle and 20-inches on the rear, with a distinctive Acid Orange accent. BMW also offers carbon compound wheels for the GTS, which save 7kgs of unsprung weight. At close to £10,000, however, they do not come cheap.

Like the standard M4 the GTS gets a carbon fibre roof and tailgate, plus a carbon fibre bonnet. The titanium exhaust saves 7kg and the rear seats have been thrown out to save weight, too. The fronts, meanwhile, are bucket seats that are half the weight of the standard items. Despite those measures the weight saving over a DCT-equipped M4 is a relatively modest 30kg.

A no-cost option is the Clubsport package, which most buyers are opting for. It includes a roll cage, fire extinguisher and harnesses. Carbon ceramic brakes are included in the list price.

We first tried the GTS at Catalunya circuit, Spain, in BMW’s recommended track setting before driving it in the UK in the road setup. On circuit the M4 GTS is every bit as focussed and uncompromising as you’d hope it to be. Whereas the standard car can feel quite short of body control, particularly at the rear axle, the GTS corners flatly and feels superbly locked down with none of the unsettling vertical motions that characterise the base model.

Its front axle responds instantaneously to steering inputs – incidentally the steering feels much more direct and communicative here than it does in the standard car – and it holds a line with real resilience and barely a trace of understeer. With more power and torque to distribute the rear axle is still easily overwhelmed, but, on track at least, the car is actually very fluid and languid in the way it moves from neutrality into oversteer – rather than being spikey and difficult to control.

Combined with the bucket seats, harnesses and suede-trimmed steering wheel the chassis upgrades give the GTS much of the precision and immediacy of a competition car. It feels a world apart from the standard M4.

The engine feels stronger than it does that model, too, but it’s very similar in character and delivery – that’s to say it has sharp throttle response with very minimal turbo lag and a useful top end, but none of the fireworks in the run towards the limiter that made the M3 GTS such a delight. The titanium exhaust, however, does give the M4 GTS an entirely different sonic character to the base model with a loud, crackling exhaust note under full throttle. Although the DCT gearbox feels off the pace of the latest twin clutch transmissions the shift speeds are far from lazy or ponderous. 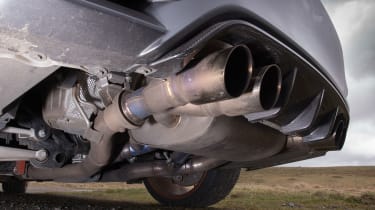 On the road you need to tread carefully around the Cup 2 tyres when they haven’t got heat in them but it is a truly thrilling machine. The road settings for the suspension don’t turn the GTS into a cosseting cruiser, but they soften things sufficiently to let it cope well with B-road bumps and although you’ll still find it distracted by cambers, you’re not left fighting the car. Perhaps more remarkably, it’s sufficiently habitable that you wouldn’t mind doing a decent motorway journey to reach a trackday, even if it was as far away as the Nurburgring.

If it sounds loud on track, it sounds positively bombastic on the road when the powertrain is in Sport or Sport+ mode. It also feels really light. The weight saving compared to a standard M4 might only amount to 30kg, but such is the increase in agility that it feels more like 300kg. The balance is also tremendously confidence inspiring in that way that a front-engined rear-wheel drive car should be.

The boosted torque can certainly make the rear end snap out of line quickly, but all the tools are there to let you catch it. The MDM setting for the DSC feels like it could be a little less restrictive, the steering wheel rim still feels a bit fat and there isn’t a top end to the revs that you want to chase, but to drive the GTS quickly is to be immersed in an utterly beguiling driving experience.

Costing £120,770 the M4 GTS is more than twice the price of a standard M4. With 700 units set to be built it will also be far less exclusive than the M3 GTS, which was limited to just 150 examples and is highly collectable as a result.