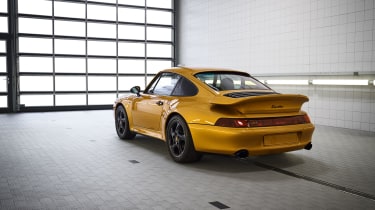 Porsche Classic’s recent portfolio piece, Project Gold, has sold at auction for a remarkable £2,435,404. The restored 993 Porsche 911 Turbo S was built from a bare chassis and finished in the style of Porsche’s 2018 911 Turbo S Exclusive Series with black wheels, black leather interior and the same gold paint.

Project Gold was auctioned by RM Sotheby’s at Porsche’s 70th anniversary sale in Atlanta where over 50 cars went under the hammer, but unlike the other vehicles in the auction, the proceeds of the special 993 went to charity. The record amount for the air-cooled 911 saw £2,298,279 being donated to the Ferry Porsche Foundation, an organisation set up this year by Porsche to promote civil, cultural and social institutions. The hammer price, although impressive, isn’t likely to be representative of a jump in values for the last air-cooled Porsche 911 and is a better demonstration of the philanthropic nature of those who placed bids. 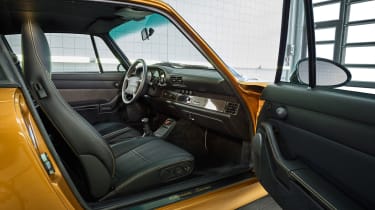 Starting with a completely stripped 993 chassis, every component of the Project Gold 911 has been fastidiously restored or replaced from a catalogue of over 6500 reproduction parts sourced from Porsche Classic. Taking over 18 months to complete, the body is borrowed from a 993 Turbo S.

Other unique exterior components include black painted Turbo wheels, the first with hollow spokes on a production car, along with black painted elements on the engine cover, door handles and wing mirrors. The head and tail lights have also been finished in a new dark finish, much like how modern Porsche models are all available with dark-tinted options.

Any 993 owners who want to add some of the Project Gold’s spirit to their own cars can now buy new parts made by Porsche Classic that were first seen on the special edition Turbo. They include black exhaust tips and an aluminium fuel tank cap. 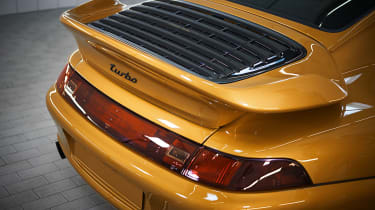 Under the rear engine cover of the gold 993 is a newly built 3.6-litre twin-turbo air-cooled flat-six engine with 444bhp, built to identical specifications to the original 993 Turbo back in 1998. From here, the rest of the car has been rebuilt to original specification, but with a modern twist on the colours and materials used.

Inside, the interior has been re-trimmed with black leather covering the seats, dash and centre console. Stitching throughout the cabin has been finished in the same Golden Yellow colour as the exterior, while new carbonfibre elements on the dash and doors now feature a bespoke golden strand within the carbon weave.

Whether you like the look of Project Gold or not, there is one major problem with the car and it’s a problem that’s also shared with Porsche’s other 70th anniversary car, the new 935; it is not road legal.