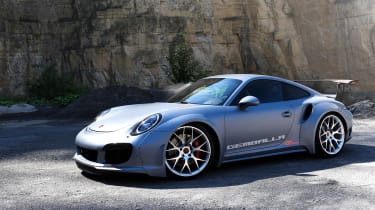 Gemballa only just released details of its power upgrade kit for the Porsche 911 Turbo, but has now introduced a styling package to go with it. Often associated with outlandish design, Gemballa has taken a more pragmatic approach to its GT Concept, opting for a motorsport inspired look.

Based on a standard 991 911 Turbo body, Gemballa fits pumped up wheel arches, widening the front and rear tracks by 30mm and 50mm respectively. Elsewhere the sills and front splitter have been re-profiled and a large GT3 RS-style wing fitted.

> Click here for our review of the Porsche 911 Turbo

The mechanical upgrades are the same as on the previously revealed GTR 8XX Evo-R BiTurbo, producing headline figures of 817bhp and 702lb ft of torque. A 0-62mph time of 2.38sec puts it into hypercar territory while 0-124mph in 7.5sec and 0-186mph in 18.8sec aren’t too shabby either. Gemballa says its top speed is a heady 224mph. 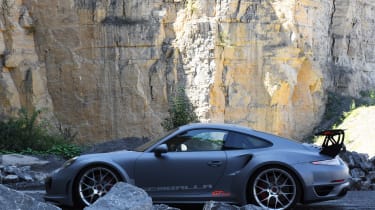 Clearly there’s more than an ECU tweak behind the performance claims and Gemballa will carry out a comprehensive reworking of the turbocharged flat-six to achieve the impressive figures. Gemballa’s engine work includes enlarged inlet and exhaust ports along with larger valves, a reduced compression ratio and a brace of new turbochargers. Reinforced connecting rods are fitted to cope with the power increase while freer-flowing intake manifolds help the flat-six to breathe more easily.

There are further modifications to the intake system along with a redesigned exhaust system with sports cats while there’s a comprehensive remapping of the electronics that govern both the engine and the gearbox. A glance at Gemballa’s power and torque graphs demonstrates that the standard production car is more muscular at the lower end of the rev range but by the time the engine’s spinning at over 3750rpm the Gemballa really takes off, offering ultimate gains of 245bhp and 149lb ft over the Turbo S.

Despite the GT Concept nomenclature, all the upgrades are available for purchase, priced at €25,490 for the aesthetic modifications, €7,150 for the 21-inch wheels and tyres and €49,800 for the mechanical upgrades, the grand total comes to €88,440 or £72,567 at the current exchange rates meaning this is no inexpensive enterprise.