LIVE UPDATES: first drive of Mini's Cooper S SUV, the Countryman. As good as the hatch? 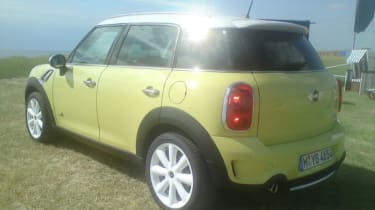 Today is the launch of Mini's SUV, the Countryman. It's by far the largest car yet to wear the new-school Mini badge, but with the regular hatchbacks boasting dynamic sparkle even in their most basic specifications, you'd be a fool to bet against a bigger version being just as much fun to drive.

So what's the Countryman like? evo is reporting live from the launch, sampling a Cooper S ALL4 - the range-topping, £22K, 181bhp Countryman - and bringing you pictures and opinions all day. Keep checking back, and scroll down the page for older updates.

Off to the press conference and dinner soon (it's an hour ahead where I am). If there's anything you want to know, comment below and I'll try to find an appropriate Mini bod and ask them. And look out tomorrow for a full review and final conclusions.

Ride is good from the passenger seat, even at the 115mph-plus my German friend is hammering along at on a restricted, camera-ridden autobahn... Wind noise and tyre roar are low. Little things, but such things can define cars.

And the engine? It's the first time we've tried the new 181bhp 1.6-litre turbo. This ain't the best place to try it, the weight here negating the extra poke. Engine's character does feel altered though. Torque arrives more smoothly, it's less whizz-bang in its delivery. Sport button doesn't make too much difference, but the engine seems to suit the Countryman's character. Need to find out what it feels like in the hatch though.

Ride is definitely better than any Mini I've driven previously bar a 15-inch wheeled Cooper. Ours is on 17s with fat tyres, some have 18s and I assume 19s are available to really pack out the arches. Bet it's not as absorbent and compliant then.

To drive it's been very pleasant so far. Like a less frisky Cooper S in fact. It's quick, has weighty (if artificial) steering, capable handling. It's a smoother thing than the hatch at six or seven tenths, but push further and roll is apparent and you begin to miss the interaction. Then again this is a taller, heavier car, so what do you expect? Sadly nothing approaching a British B-road has materialised so far.

Looks-wise I reckon the car is colour sensitive. In yellow with the near obligatory white stripes it's quite appealing and seems neater somehow. Still an aesthetically challenged car to some eyes and details like grille and lights and big. It's the furthest cry yet from an Issigonis Mini. Wonder what he'd make of it?

The official coffee stop is actually an ice-cream stop. We're at a German beach in 30 degree heat having crossed a mighty bridge over the Nordostsee canal which links Baltic and North Seas. Sadly there's no beach-based fun in the Countryman. Time for my German counterpart to take the wheel and me to sit nervously in the passenger seat while attempting to gather my thoughts.

Off-road time. Despite limited ground clearance the Countryman feels adept on rough surfaces thus far. Mind you the track is well trodden and feels like it was prepared to flatter the newbie. Surely Mini wouldn't do such a thing?

Impressions so far are of a small SUV with Mini bits sprinkled in - exhaust pops and bangs on lift-off, sharp steering and the usual chintzy interior. Feels more grown up than a regular Cooper S of course. Ride seems softer, responses a little blunter, but very composed as a result. Gonna take a proper road to find out, though.

Now doing snaps. Hoping the picture conveys how hot and sunny it is here. More like southern Spain than northern Germany.

Loving the aircraft-inspired handbrake. Launch proving difficult so far. The route took us straight on to a grid-locked autobahn. Now detouring around, but as usual with Germany, twisty fun roads are proving elusive.

You can read tweets on the radio screen. How very down with the kids.

Lots of Countrymans, or should that be Countrymen? First impressions; it's tauter and more compact than pics suggest, though boot isn't huge and it's only a four-seater. About to hit the road. There'll be some light off-roading too, apparently.

All the Mini Countryman pictures and details here

Six of the most magic Minis meet in a group test