It's got two seats, is made by Renaultsport and has the Twingo 133's engine, but is it our kind of roadster? 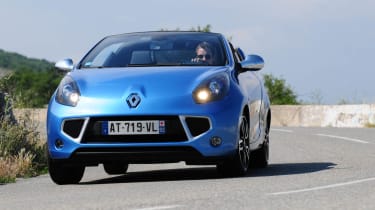 There’s something surprising under the skin of Renault’s new Wind roadster-coupe. Engine and electric power steering apart, it’s pretty much a Renaultsport Clio of the previous generation. And you thought, as I did, that this was just another variation on the supermini-based coupe-cabriolet idea, a car to be adopted by fashion-loving sunseekers and probably best ignored by, well, people like us.

But even without this welcome Renaultsport dimension – the division has developed the entire car, incidentally, making it the first Renaultsport creation not to bear the name – there’s interest here. The roof resembles the headpiece of a Ferrari 575 Superamerica, except that the Wind’s roof is black plastic, not electrochromic glass, and it hides under a rear-hinged cover when stowed. But the key point – that it opens by flipping back on itself on a single axis, and then lies on top of the boot space instead of invading it – is identical.

The entire powered opening and closing process, cover included, takes just 12 seconds, but the Wind must be stationary and the locking or release of roof to header rail is your job. It’s a great system, and the surprisingly big boot with its hefty suspension-tower triangulations is all useable, always.

Of course, this makes for a tall tail, but the Wind contrives to make this into a buttressed sports-car look – think Honda CRX Del Sol or even original Lotus Europa – rather than merely a small car with an ungainly bottom. It helps that it’s purely a two-seater, so the roof panel is short and there’s a structurally helpful bulkhead behind the seats. The entire roof system weighs just 21.8kg.

These are all promising ingredients, and the mostly black, arch-filling 17in wheels and 40-profile tyres add more hints that this could almost be a sports car. It even comes with the 131bhp, 1.6-litre engine from the Twingo Renaultsport, keen to rev to 7000rpm with a full-throated induction snarl (albeit a fairly quiet one) that we weren’t quite expecting.

Straight away the Wind feels firm, taut, rigid in the body. This means the suspension can be quite stiff without generating a structural shudder or making the ride crashy. With the roof up it really does have shades of a Clio 182 in its mix of grip and throttle-adjustable chuckability, but the electric power steering, for all its credible weighting, never gives a proper feel of the front end’s adhesion. You take it on trust; luckily the Wind gives you plenty of other sensations, including the curious one of frequent light doses of ABS pulsing even when grip seems good.

Roof down, you feel the slight rigidity loss not in windscreen shake, of which there is very little and only on poor surfaces, but in the way the steering goes springy and approximate relative to the suspension’s taut control. It’s not serious but it’s there. However, now you can enjoy the wind rushing over your Wind; you sit well down in the cockpit with little buffeting, even less if you fit the wind deflector, which then makes a limited view aft even worse. Thick screen pillars further eat into the panorama, and the rear buttresses mean you’ll be using the door mirrors a lot.

What the Wind needs more than anything, though, is more energy from its engine. The 131bhp 1.6 can be wound up to a fair pace, and gearing is short, but below 4500rpm it isn’t really interested in hauling the Wind’s 1173kg (that’s heavier than an MX-5), especially if a hill is involved. There’s also a 1.2-litre turbo engine with 99bhp, taller gearing but a much flatter torque curve, and on tight, twisty roads it actually makes for a quicker Wind.

Three trim levels are offered, topped by the ‘Collection’ with leather seats, chrome trimmings and an intriguing transparent-red instrument cowl. There will be 200 of these. Otherwise it’s Dynamique or Dynamique S, the latter as shown here; the 17in wheels and a grander, more-connectable sound system are its chief enhancements.

You’ve probably gathered by now that the Wind isn’t a sports car. Nor, in an enthusiast sense, is it meant to be. That doesn’t stop it being the purest, neatest and most enjoyable of the compact coupe-cabrios. 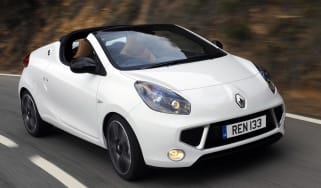 Renault has announced a radical plan to turn around its flagging fortunes in the UK, axing more than half of its current model line-up and slashing it…
Visit/renault/wind/7068/renault-wind-12-tce-review 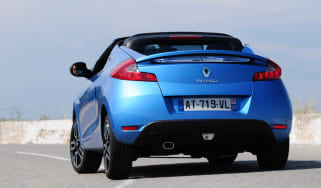 The £12,995 Renault Wind 1.2 TCE is more fun that you might be expecting
Visit/renault/wind/11548/renault-wind-gordini-revealed 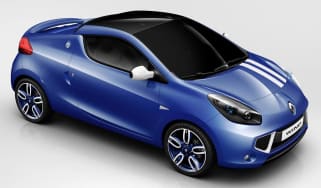 Renault reveals the latest addition to its sporty Gordini range, the Renaultsport tuned Wind roadster
Skip to HeaderSkip to Content