Renault has announced a radical plan to turn around its flagging fortunes in the UK, axing more than half of its current model line-up and slashing its dealer network 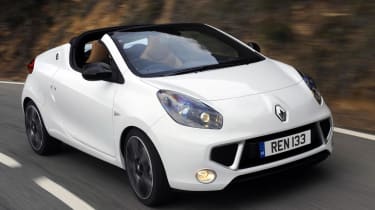 Renault has announced a radical plan to turn around its flagging fortunes in the UK, axing more than half of its current model line-up and slashing its dealer network.

The slow-selling Laguna, Espace, Modus and Wind roadster are all set for the chop, being removed from sale next February. Passenger versions of the Kangoo van will also be culled. At the same time around a third of the company's UK dealerships face being closed or merged.

That will leave Renault with a truncated range consisting of just Twingo, Clio, Megane and Scenic - the models it claims it actually makes a profit from selling in the UK. The company warns that the radical surgery means that sales will fall further next year - after three years of sliding volumes - but that it anticipates that volumes will return in 2012 as more new models come on stream.

The new, fourth-generation Clio, due to arrive here next November, is a vital part of the relaunch strategy, although Renault's UK boss Thierry Sybord says the company is planning to move away from the deep discounting that has been used to support flagging sales of the current Clio. Next year we'll also be seeing the facelifted Twingo and Scenic (in January and February) and the arrival of the all-electric Twizy, Fluence Z.E and Zoe.

From 1st February, Renault will also be introducing what it's describing as its '4 plus' aftersales package. This will include a four year/ 100,000 mile warranty, four years (or 48,000 miles) of free servicing and four years of roadside assistance - together with various four-year finance packages.

Renaultsport models, which Sybord confirmed are profitable, will continue - and the company is committed to making 'halo' performance versions of forthcoming models.

In an impressively frank presentation to journalists, Sybord admitted that 'if we don't do something now, after that it will be too late.'