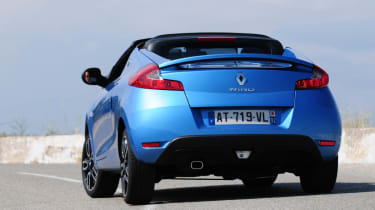 What is it? The Renault Wind, a titchy Twingo-based two-seat roadster with a roof mechanism similar to the Ferrari 458 Spider’s. With a recent Renault price cut in place, this entry-level 1.2-litre turbo model costs a mere £12,995 in basic spec. Technical highlights? The roof is the obvious place to start, the single panel hard-top flipping 180 degrees backwards to its storage on top of the boot-lid. It takes just 12sec to convert and the 270-litre boot storage remains constant, so there’s no shuffling of your luggage to accommodate any sun seeking. The chassis is heavily related to the pre-2006 Renaultsport Clio and the Wind’s dynamics have been entirely developed under the hot hatch division’s wing. It’s a move which sets Renault’s cabrio apart from its traditionally flaccid competitors. What’s it like to drive? We’ve previously driven and been quite taken by the 1.6-litre Wind. And this £900 cheaper, 32bhp less potent 1.2 TCE version feels little slower at real-world speeds. The Wind’s surprisingly taut body, sharp steering and quick responses remain, and with the engine’s curiously whistly turbo on song, pace isn’t far off its naturally aspirated sibling. Out of junctions and during town driving, this engine’s actually more responsive. It’s when you drive with a bit more gusto that you’ll miss the 1.6 and its extra power; the 1.2 is quicker to run out of puff and you’ll rapidly lose pace if you ever drop out of its powerband. The 1.6’s oddly appealing growl is also replaced by a predictably-dull small-capacity engine note. But there’s enough power to keep the 1.1-ton Wind feeling breezy. Its target buyer is unlikely to frequent trackdays or plan full-bore trips through the Elan Valley, and this cheaper to buy, tax and insure variant should fulfil their needs. How does it compare? The only drop-tops that come close for both price and performance are the 84bhp/£11,200 Smart Fortwo Pulse and 84bhp/£14,100 Fiat 500C TwinAir. The Wind is more fun to drive than either. The cheapest Peugeot 207CC can’t compete dynamically and costs £16,545, though does have four seats. Anything else I need to know? The car lives up to its name inside the cabin; cruising at dual carriageway speeds with the roof folded, you’ll struggle to hear the radio or your passenger. A £200 wind deflector lies on the options list to help rectify this.