We drive the convertible Ferrari 458 Italia, the folding hard-top equipped 458 Spider. As stunning to drive as it is to look at? 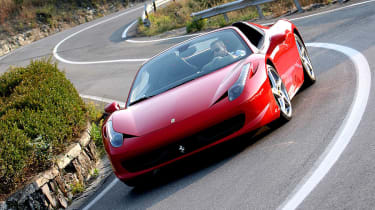 What is it? The £198,856 open-top version of the so-nearly-perfect Ferrari 458 Italia coupe. Thing is, this could go two ways. Either the extra exposure – to the elements and the 458’s powerful singing voice (surgically re-tuned for the alfresco concert) – intensifies and completes Ferrari’s finest driving experience. Or the additional weight and reduced rigidity do just enough to break the spell. Technical highlights? The arrival of a drophead 458 was a given. For there not to be one would have broken with a Ferrari tradition. But most of us expected it to be a soft top. Instead, the 458 Spider is the first mid-engined Ferrari convertible with a folding metal roof. Actually, it’s aluminium and 25 kilos lighter than the F430’s fabric affair. Nippy, too, opening and closing in just 14sec. Inspired by the elegant and simple roof design created for the 575 Superamerica, it folds in two sections and stows very space efficiently beneath the engine cover. The whole mechanism is so well packaged it even allows enough room for a couple of custom made suitcases to be placed on a shelf behind the seats to supplement the relatively generous front boot capacity. There’s only the slightest increase in aerodynamic drag with the roof in place (from a Cd of 0.33 to 0.335) and nothing awkward about the way it looks. If anything, the Spider’s reconstituted back end is more handsome than its hardtop sibling’s, despite losing the transparent engine cover. In its place is a painted cover with vents which, although plainer, lends a tougher, more coherent look to the rear aspect, especially in conjunction with twin buttresses which rise to flattened points just above the seats’ head restraints and provide roll-over protection as well as helping to manage the airflow over the cabin with the roof down – further tailored by a little glass window between them that can be raised and lowered to suit and has an ‘optimum’ default position. All told, the Spider weighs only 50 kilos more than the coupe (for comparison, opting for an Audi R8 Spyder adds around 100 kilos to the coupe’s weight) and, as you might expect, Ferrari’s engineers have made various mechanical adjustments to finesse the car for its perceived clientele: slightly softer damper rates (though the spring and anti-roll bar settings are unchanged), a gentler throttle map (more on this is a moment) and specific induction and exhaust tuning to re-master the 458’s V8 soundtrack for maximum aural gratification. In cold statistics, the Spider hardly gives anything away to the coupe. Its 198mph top speed is 4mph down and its 3.4sec 0-62mph time just a tenth slower.    What’s it like to drive? Anyone inclined to liken the 458 to a massively convincing and almost impossibly good supercar driving simulation – in the sense that it gives you so much speed and sensation for so little apparent physical input - will appreciate the Spider’s more visceral connection with the outside world. Although not the most ‘open’ of open top cars – partly due to the cocooning effect of the buttresses – the rush towards the horizon somehow seems less digital and more heroic with the wind ripping through your hair and the chance to hear the 458’s uniquely penetrating scream taking on a whole new range of textures and colours as it bounces off the surrounding roadside furniture, countryside, tunnel wall or whatever. I suspect this makes more difference to what you actually hear behind the wheel than any ‘hyping’ of the induction and exhaust note Ferrari may have done.  Fundamentally, the performance and chassis dynamics feel the same. The astonishing acceleration and grip levels seem unaffected, likewise the almost preternaturally direct and precise steering, the utterly nailed front end and the exploitable degrees of response/noise/playfulness the various Manettino settings allow. Perhaps just a fraction of the coupe’s uncanny, Lotus-Elise-like litheness and agility is missing and, on some of northern Italy’s more ravaged and beat-up roads, a few shimmies could be felt through the body structure. This is no impediment to the Spider’s speed across the ground, though, nor its suspension’s remarkable ability to glide over poor surfaces yet still retain absolute control. However, the so-called gentler throttle map proved anything but – on our test car, at least. I think ‘binary’ may have been a better description. On the very lightest of  throttles, and with the Manettino on any setting other than ‘Wet’, fuelling was either on or off, making it virtually impossible to modulate speed smoothly in traffic around town or on the autostrada. By the time our driving impressions hit the printed page, Ferrari will have checked the car and revealed whether it was untypical.     How does it compare? Despite costing £25,675 more than the 458 Coupe, Ferrari expects the Spider to outsell it quite comfortably, with a prediction that 60 per cent of UK buyers will go for the convertible. We’ll have to wait until next year for McLaren’s open MP4-12C, which is rumoured to use the same roof mechanism, but in the meantime there’s the Lamborghini Gallardo Spyder LP570-4 Performante (£188,388), the Audi R8 Spyder V10 (£117,710) and the Mercedes SLS Roadster (£176,895) – all good, all sonically gifted, all less expensive than the Ferrari. All slower and (comparatively) duller, too.   Anything else I need to know? The buttresses may look great but they destroy rear three-quarter visibility, while with the roof up, refinement is very much on a par with the coupe’s. Around Ferrari’s Fiorano test track, in the hands of a Gifted One, and with the traction control and ESP switched off, the Spider laps just half a second slower than the coupe.