Forza Horizon 3 review - the only driving game you'll ever need 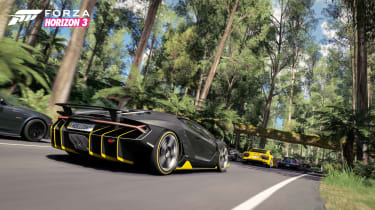 Forza Horizon 3 kicks things off with a bang. You’re dumped immediately behind the wheel of a Lamborghini Centenario and tasked with blasting across the Australian outback while trying to keep  pace with a LaFerrari and Ford GT.

The first thing you notice is the graphics. This is an unbelievably good looking game, but not just the cars, everything from the roads to the trees blurring out in your peripheral vision, looks fantastic. Then there’s the sound track, not just the in-game music, but the sound of the Lamborghini itself. Finally a racing game has got car sounds right.

The end result is an utterly visceral experience, which, with the right hardware and sound system, would be hard to match. 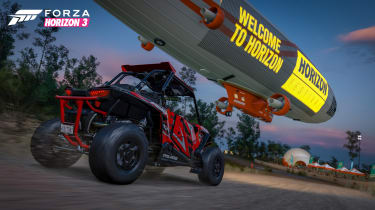 Sure, the Centenario appears to have borderline ludicrous levels of grip and it feels slightly stupid sending a priceless hypercar through a muddy Australian forest, but embrace Forza Horizon’s ridiculousness and it’s hard not to enjoy.

The idea of Forza Horizon 3 is to offer up the ultimate sandbox for car fans. It does so by placing you in charge of a car festival in a microcosm Australia’s landscape and then asks you to grow it, by racing a vast range of cars across all different terrains.

It’s a simple formula and Horizon 3 does have a decent crack at bringing some element of story to things, but in reality it’s much more fun to skip the cut scenes and get on with drifting Group B rally cars around Byron Bay.

What Horizon 3 has done differently to its predecessors is in the amount of choice it offers. Whereas before it was a game predominantly about supercars, now the car list spans virtually every possible fetish, from BMW Isettas to the Ferrari F12 TDF.

It also adds an increasing level of customisation, letting you add body kits, to engine swaps and tune just about every aspect of your car. This can then be shared, online, with the rest of the world. 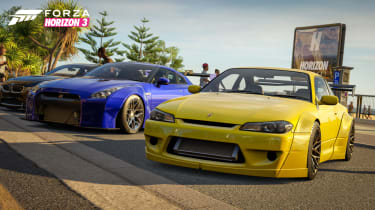 Chances are, if you own an ‘evo’ car, it’ll be in the game. We had vast amounts of fun building a V10 powered E46 M3 drift car for example, as well as converting one to rally spec.

Speaking of which, there’s a much bigger emphasis placed on off-road racing in Horizon 3. As you’d expect, setting things in Australia has allowed for a much more diverse amount of terrain to drive across. But unlike before, the number of off-road cars available is also more diverse.

Yes, initially there are some slightly bizarre cross country runs in road cars, but save up enough and the fun begins with an Ariel Atom. Whereas before off-roading was an add-on, now it feels like a truly complete part of the game, with a more convincing physics engine and a proper list of cars to choose from.

Other new features include added multiplayer functionality, including the ability to create ‘bucket lists’ to share with friends. The idea is you pick a car and a location and then set people challenges, all of which can then be sent to other friends who can try and beat them.

There are elements to Horizon we find frustrating. The varying road surfaces mean any road-centric cars can become virtually useless as soon as you head off the beaten track, which means a beefed up off-roader is almost always the best choice for most races. For example, a tuned Lamborghini Urus we were gifted early in the game still appears to defeat all the most committed of opponents. 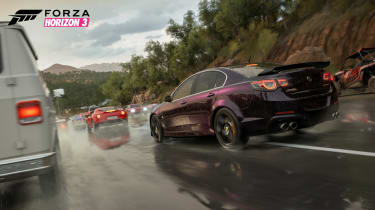 Then there’s the fact that despite its unbelievable graphics and levels of polish, there still isn’t a really memorable sequence of roads to drive. Forza Horizon could have the recipe for the ultimate B-road blast, but it never quite manages it.

Lastly, and this is through no fault of Playground Games, Horizon 3 just doesn’t do enough differently to Horizon 2. It’s probably the most complete video game we’ve ever played, with such a huge amount of content on offer that you’d need to put hours away to even get close to driving and doing everything.

It’s difficult to see that as a bad point really, as we actually prefer Horizon 3 to your standard Forza game. But it’s got such serious credentials now, we just expected things to be done a little differently this time.

Still, if you’re in the market for a racing game that might just be the most fun you’ll ever have with your Xbox One, then this is it. Oh and here’s a tip for beginners, turn damage simulation off, it means you don’t have to worry when you jump that G Wagon at 120mph backwards off a cliff.