Three different approaches to the rear-drive coupe concept, but which is the one to have? 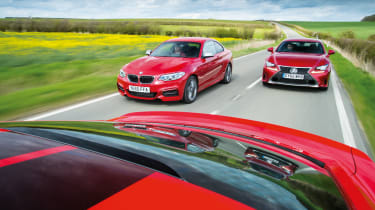 Wherever you care to look, the automotive industry seems to be converging on the same technical solutions. Hypercars must have some form of hybridisation, hot hatches are powered by four-cylinder turbo engines, supersaloons run twin-turbo V8s. Variety and novelty are being wrung out of almost every sector, but in the case of the £35,000 four-seat performance coupe the picture could hardly be more different.

Just a few months ago the sector more or less didn’t exist – only BMW would sell you a proper, performance-orientated two-door with four seats in this price bracket – but with the recent arrival of the Ford Mustang 5.0 V8 GT there is now at least a little more choice. Does the Lexus RC200t F Sport also qualify as a proper, performance-oriented coupe? We’re about to find out. 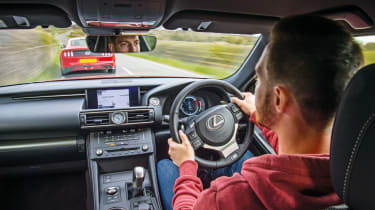 The BMW M235i, with us since 2014 and recently updated to the 240i, uses a turbocharged six-cylinder, its body is small and compact and you can choose to have three pedals or two (we’ve got the former here). Despite sharing so much with the new Mustang on paper – price, door- and seat-count, driven wheels – the two cars are actually profoundly different in execution. The Ford has a normally aspirated engine with eight cylinders displacing five litres, and at more than a foot longer than the BMW, its dimensions belong to another league. Like the BMW, it offers a choice of transmissions. The Lexus, meanwhile, splits the two for size and uses a four-cylinder turbo engine driving through an automatic transmission only. In engineering terms these three cars differ massively, then, but it’s actually the differences in their characters and in the way they drive that separates them even more.

The M235i is no stranger to these pages and for very good reason: it’s an entertaining little coupe with masses of performance at an accessible price. Along with its M135i relative and the VW Golf R, the M235i has established itself as one of the real-world heroes of the last few years. It’s a car we’re rather fond of, but it’s far from perfect.

The turbo straight-six displaces 2979cc and develops 321bhp and 332lb ft of torque. Fitted with the six-speed manual gearbox – which has a slightly notchy and rubbery shift – it’ll reach 62mph in five seconds, topping out at a limited 155mph. It starts at £35,235 and is due to be superseded by the more powerful M240i later this summer. 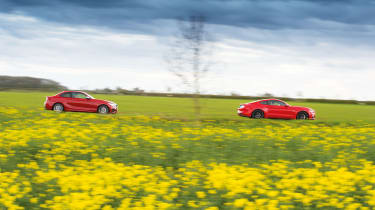 The exterior shape is pert and quite handsome but it has started to look a little anaemic since the arrival of the athletic, pumped-up M2 (see evo 220). All of a sudden it’s the bookish, bedroom-bound sibling. The cabin is still attractive and the quality is pretty good, too, but while there is space in the rear for adults, they’re unlikely to thank you for the lift.

Dynamically the M235i is a complicated machine. In the most reductive terms, cars are either soft or they are stiff, so they roll and heave and wallow about, or they skip and bounce down the road. The M235i, though, does a bit of both. It finds itself being deflected by bumps like a very firm car, but the exaggerated vertical movements as body and wheels get all out of phase with one another are the hallmarks of a very softly sprung one. That sounds like the worst of both worlds, and the result is that the car feels very busy down a typical British B-road, but somehow it works. You have to learn to trust that the BMW will keep itself rooted to the road surface, that it isn’t going to launch you over the nearest hedgerow, and after that point it all starts to make sense.

The front end is very good indeed – it’s not the full M-car, zero-understeer type deal, but it is very good – and there’s an agility and immediacy of response to the chassis. That means you really can attack a road in it, and although tauter body control would do good things for your confidence, it wouldn’t make much of a difference to your outright pace.

The steering is crisp and sharp, the engine is responsive and reasonably energetic at the top end and the performance is very strong. BMW does offer an optional limited-slip differential, which is wise, because this is a car that really benefits from having more control at the rear axle away from a corner. Without the uprated diff it can be quite scruffy, but equipped with an LSD the M235i is very playful and precisely controllable at corner exit.

It is not difficult to find weaknesses in this car, but neither is it difficult to have a great deal of fun in it. This is a coupe that’s true to the virtues of rear-wheel drive, one that has the depth of ability to deal with both a tedious commute and a quick thrash across the moors. 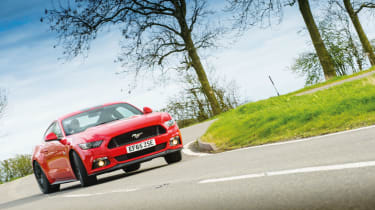 It sets a high standard for the Mustang. When you step from the BMW to the Ford you’ll probably laugh out loud at the difference in size between them. It’s like putting on André the Giant’s dinner jacket. There’s a chasmic difference in their cabins, too, for whereas the M235i’s interior is restrained and the materials of good quality, the Mustang’s is over-stylised to the point of pastiche – the speedo reads ‘Ground Speed’, for heaven’s sake – and many of the plastics are hard and scratchy. It’s clear to see what sacrifices Ford has had to make to keep the list price down, and while the Mustang’s interior is far from offensive, those buyers who are used to German standards might be unimpressed.

But where the Mustang loses out on soft-touch plastics, it wins back for having a sodding great V8 under its bonnet. You’ll either love the good ol’ blue-collar, all-American nature of the thing or you’ll think it brash and showy, but the engine is as characterful as they come. It means there’s a great deal to enjoy about the Mustang at moderate speeds and that’s becoming an increasingly important aspect of the modern performance car. Revs build and die slowly, but the warbling soundtrack and muscular performance distract you from the slightly lazy response. The nose also rears up under acceleration like a planing boat, and that just feels cool.

This is a different sort of Mustang to the ones that came before it. It was designed to work all around the world because it is being sold globally, and rather than a live rear axle it uses a sophisticated multi-link arrangement. You feel that most when driving away from a bumpy corner because traction really is very strong indeed. In fact, if you haven’t deliberately unsettled the car on the way into the corner, you won’t be able to persuade the rear wheels to break traction on the way out, no matter how much throttle you throw at them.

The car will slide, though, and it’ll do so faithfully and in a controllable, languid manner. Global remit or not, the Mustang does still feel like a traditional muscle car, and despite that clever rear end it still wants to be stroked along rather than hurried. It feels much more settled than the BMW and less prone to being pushed around – that could be a function of it carrying 10 or 20 per cent less ‘ground speed’ – but the body movements and the responses of the chassis are lazier. The size of it also means you have to wind back the commitment levels on the UK’s narrow roads. 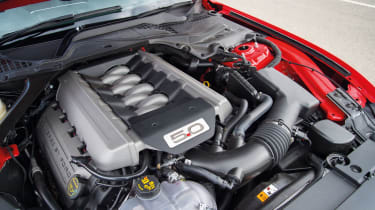 The Mustang’s steering is always rather remote, but the gearshift is actually very mechanical and precise. The brakes are good, too, although if you can find a way to heel and toe in this thing please write to tell me how. Judged as a sports coupe the Mustang is hopelessly outpointed by the M235i, but it does make the BMW feel a touch cold.

They are two colossally different cars, and the Lexus isn’t much like either of them. Its horizontally layered dashboard is like a 1970s vision of the future, but the quality of the materials and the standard of fit and finish are the best here. Some won’t like the design, but Lexus must be applauded for doing something different. It would have been terribly boring if it had simply copied the big European manufacturers and the same is true of the bold exterior design.

The Lexus is demonstrably the least sporting car here, and by some margin the least powerful, too. Its 2-litre turbocharged four-cylinder engine develops a relatively modest 242bhp and 258lb ft, and the 0-62mph time of 7.5 seconds and the 143mph top speed make it the slowest of the three. At £36,495 it is, however, the most expensive. 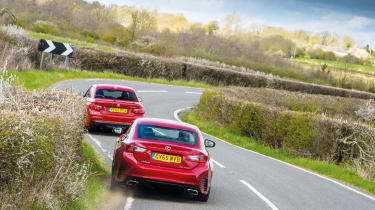 On the road that level of straight-line performance is enough to make brisk progress, but only if you use full throttle. That’s not a chore by any means, but there is a certain satisfaction that comes from knowing a car has something in reserve and it’s not a satisfaction the RC200t imparts. You also need to run the car in one of its Sport modes at all times because the default throttle map is so woefully impotent.

The payback from being less overtly sporting than the M235i or the Mustang is that the RC200t is easily the most refined and cosseting of the three, riding in a very fluid and relaxed manner and suppressing wind and road noise very well. It’s the one you’d choose for a long journey – a touch more performance would give it serious GT credentials – but I can’t imagine ever rising early on a Sunday just to go for a blast. The steering is entirely digital, the gearbox is quite slow to respond to manual gearshift requests and there’s simply no drama or excitement in the power delivery.

The Lexus’s chassis balance is steady-state understeer and it’s the least agile and rewarding of three. It also lacks body control and outright grip, much of which is down to its chunky 1675kg kerb weight, and that discourages you from taking it by the scruff. It just isn’t trying to be that sort of car.

In fact, all three cars have a different set of priorities and as a result have different characters, too. The M235i gets the nod because it is the most entertaining to drive quickly, but choosing a winner almost feels arbitrary because when you dig beyond the surface, they actually have little in common. At a time when many other sectors of the industry are stuffed full of cars that are increasingly alike, this rich, varied and diverse coupe sector is well worth celebrating.