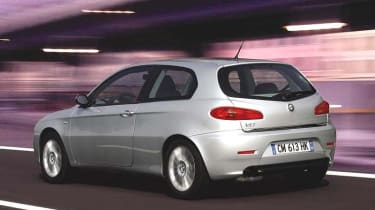 The right ingredients have always been there. An Alfa Romeo badge is a good start, suggestive of a warm, sensation-rich approach to the business of driving and a heart-driven keenness to be different from those clinically measured Germans. And if there's a little looseness, a little uncertainty, a little anarchy in the mix, aren't these imperfections the key to a fulfilling relationship?

Well, maybe. But only if the important parts are right on target, and the ensemble is fundamentally dependable. Otherwise, the high emotions can easily turn to temper. Not for nothing does Alfa Romeo have a higher than average representation in the independent specialist garage sector.

We should love the Alfa 147, then, if it does what it's supposed to do. Love hasn't been that evident so far, though; quite apart from any quality and service issues, the cars just haven't been engaging enough for all their enticing looks and tempting detailing (gauges marked olio and acqua, for example). Now it has had a gentle facelift, along the lines of those recently visited upon the 156, the 166 and the almost-moribund Spider/GTV, and crucially some subtle suspension tweaks. Could these be the making of the machine? It's possible.

First, the visuals. The headlights are wider, pointier and sleeker than before. They flank a broader version of Alfa's shield-shaped grille, and the pair of lateral air intakes beneath is both lower and less of a homage to retro Alfas. At the back, the outer part of the tail-lights remains the same but the inner section pierces further into the tailgate. The bumper is deeper, too, with a raised central cut-out along its lower edge to give a hint, perhaps, of an aerodynamic diffuser.

All 147s, instead of just the GTA (which doesn't get the facelift), now have diagonally-ribbed door trims in a style described as cannelloni, and 'buffalo skin' finish on the facia and door casings.

We're driving in Naples, near to where the 147 and 156 are made, at Pomigliano d'Arco, but of more immediate interest is the pock-marked road surface. The 147 is soaking up the road scars rather better than past 147s and their cousins (156, GT) have done.

What's going on? Has Alfa finally got the double-wishbone front suspension to do all the jobs a suspension system is supposed to do? The GT has already shown the possibilities, but this 147 - the 16-valve JTD version, now with 150bhp instead of 140 - feels particularly fluid and at ease with itself, while retaining the breed's usual quick, precise steering. Other engines continue unchanged, incidentally, which means the 2.0 is still a Twin Spark, not a direct-injection JTS.

Out on the open road in search of scarce bends, I'm discovering a lack of the past high-speed fidget and a clean, consistent response to the steering. It's not linear, for none of this chassis-family of Alfas has ever had a linear steering response, but the transition from gentleness around the centre to hyper-alacrity further on lock is more progressive now.

The key to this new competence is a new set of suspension settings: softer springs (with unchanged ride height), a hollow front anti-roll bar and - crucially - new dampers. These are more compliant over small disturbances but control the body's movements more tightly - exactly what was needed and, incidentally, exactly what the aftermarket Harvey-Bailey suspension kit, sold for 156s, also aims to achieve. Call it convergent evolution. Part of the 147 dampers' secret is a thicker damper rod running in Teflon guides, to reduce 'stiction'.

Now it gets baffling, for reasons of terminology. The 156 range has come with standard or too-stiff Sport suspension, but the 147 has never had that choice. However, the new suspension, an option on all versions except that high-power JTD, on which it is standard, is called Comfort. True, it is much more comfortable (as a drive in the unComfortable version quickly showed) but it is also more engaging to drive quickly because the steering is more consistent and has better feel. There's no loss of precision, no unwanted extra body roll. Calling it Comfort sends out ambiguous messages, and Alfa would be well advised to make this the standard set-up for UK cars.

Always a tempting idea, the Alfa 147 now comes a step closer to fulfilling its promise. I'd rather have one than an ugly BMW 1-series, actually, but maybe I'm just odd.