Seven specialist produces its own 'CSR', and gets it on the road first 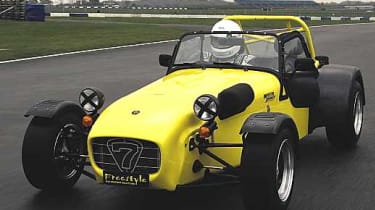 If you like the idea of the Caterham CSR, but prefer the traditional narrow Seven body, independent Caterham tuners Freestyle may have just what you're looking for. Caterham's all-new CSR may not be road-ready just yet, but we've already driven a Duratec-powered Seven with push-rod suspension on the highway, and very good it is too. The Freestyle Seven you see here is, of course, not an official factory car, but it has been designed, built and developed by a team with a wealth of Caterham knowledge. At the helm of this independent project are ex-factory after-sales manager and racer Len Unwin and Gary May, the man who developed the extraordinary JPE. Together they set up Freestyle Motorsport Solutions some three years ago to produce a range of after-market trick bits for the Seven. The standard-sized chassis (non-SV) car you see here with its extra-wide track and new suspension represents the culmination of that work to date. This 2.3-litre Duratec unit has been tuned by Minister, rather than Cosworth. Minister, you may remember, was responsible for all Caterham's K-series engine tuning, including for the R500 Evo. It has been selling tweaked Duratecs for a couple of years now and, by fitting fuel injection throttle bodies and a new cam and polishing the ports, is able to produce as much as 270bhp. This car has 'only' 215bhp, but just like the CSR it benefits from thickly spread torque. With 190lb ft being available at 4500 revs and full beans at 6700rpm, the powerband is much wider than in any high-powered K-series car, so much so that Freestyle doesn't feel there's a need to fit a close-ratio six-speed gearbox. The delivery is certainly smoother than a K's, with rapidly building speed accompanied by a deep-bass bellow rather than a manic scream. Moving the springs and dampers doesn't just help the airflow at the front of the car. On a traditional Caterham the space in which the damper has to operate and control the spring is compromised by the angle it has to be set at. The theory behind the Freestyle system is that it will allow more effective damping, improving the ride and allowing a greater range of adjustment. Perhaps the most impressive aspect of this arrangement, however, is that it can be bolted straight onto a standard car, with no modifications to the nose or side-skins. Freestyle has also added new wishbones that extend the front track by 110mm, matching the width of an SV. At the rear, this Seven retains the De Dion set-up, but with a lengthened axle tube and driveshafts. The effect of all these changes is to remove much of the nervousness of the standard car. The ride is very composed, soaking up bumps, while the wider track creates greater cornering stability. The raw edginess normally associated with Sevens has in effect been ironed out. You can now hit a mid-corner bump without the car twitching in your hands. It may not feel quite as frantic on a sinuous B-road, but it'll be at least as quick. And where a regular car will be bouncing over a series of sharp bumps, this car is unfazed. The intimacy is still there; it still feels as direct and responsive as ever, but you don't need to be quite as pumped-up to drive it. The steering is lighter too. Overall, it's a more grown-up, more liveable car. It could even be called the long-distance Seven, for owners who like to rack up more than a few thousand miles a year. As for the aero kit, May admitted they couldn't quantify the benefits of the louvered wheelarches and rear diffuser because they hadn't been to a wind tunnel, but they do know they're worth an extra 2mph at the end of the Revett Straight at Snetterton! The whole package is an impressive one. The suspension and engine packages are available as upgrades for current Seven owners too, while the car as tested here will be built to order for £29,995, rising to £33,995 for the 270bhp version.