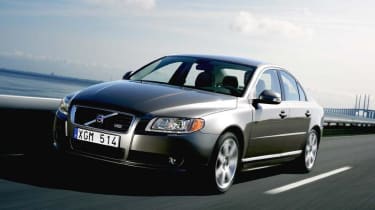 Here, we were told, is a car inspired by the landscape of the beautiful Skane region of Sweden through which we were about to drive. To make the point, the bare rocks on the giant presentation video screen magically became a Volvo S80 shape, while the hillocks of a snow-covered meadow became the facia top. And sure enough, the new Volvo S80s lined up for us to try, all in metallic grey, silver or a kind of greyish-brown, did indeed match perfectly their land-inspiration. But only, I think, because it was raining. Anyway, there they were, peas in a Volvo-pod. This new S80 looks like a big S60 with an enlarged S40 front. The old one looked like an enlarged S40 with an S60 front. They've got vigorous genes, these Volvos, just like the Royal Family. So how do you tell the new S80 from the old one? Apart from the side windows (no more extra side window at the back), the silver strip across the tail is a clue. Also the more protruberant snout and the chamfered front corners that disguise the EuroNCAP overhang. The new proportions, with the windscreen pulled forward, make the new S80 look smaller than the old one. But no: it's an inch longer in the wheelbase and wider in the track. The doors have lost their concave, pre-dented look, too. The old S80 has been around since 1998, so its style has worn well. It even developed into a reasonable drive after its mid-term steering-sharpening session. I tried one last July on the way back from a secret Volvo prototype-driving mission, and thought how much better it was than the very unfinished new-S80 prototype I had just sampled. Its suspension settings were miles from finality, but the prototype did have four-wheel drive and the Yamaha-built V8 engine already seen in the most expensive XC90s. Suspension apart, the mechanical cocktail did seem promising. Now I've tried the finished article and it's not bad at all. The platform and suspension are broadly those of the new Ford S-Max/Galaxy and the next Mondeo, suitably enlarged, while the 4.4-litre, 315bhp V8 has a narrow 60deg vee-angle instead of a V8's usual 90deg. That lets it fit transversely but calls for a complex crankshaft and a pair of balancer shafts in the sump to make it run smoothly. Which it does, emitting a V8 woofle most odd in a Volvo saloon. The driving dynamics are so polite and filtered that you can't immediately sense it is four-wheel drive, but the S80 gets its power down so well - even when trying to mimic the claimed 6.5-second 0-62mph time - that it must be. This model and the 3.2-litre in-line six version can have 'Four-C' adaptive dampers with comfort, sport or 'advanced' settings, but the differences aren't huge. You can also have power steering adjustable to three levels of assistance, but the feel is artificial in all of them. The least assistance feels the most natural: this mode plus 'advanced' - effectively firm and non-adaptive - damping makes for the keenest drive: hardly involving but fluent and capable. In some ways the new in-line six, matched to front-wheel drive, is more pleasing. The 238bhp unit is extremely smooth and has a fine spread of power, not soaked up too much by the six-speed auto it shares with the V8. There'll be a 285bhp turbo version by July next year. Other engines include the existing D5 turbodiesel, disappointingly gruff in this application. Dynamics passable, then. Furnishings? The matt wood looks either Scandi-cool or plastic according to your viewpoint; the linen-look aluminium is preferable. The rear doors shut with a surprising clang, the column stalks feel hollow, the climate control makes the cabin too stuffy. It's a well-made car, and that 'floating' centre console adds to the internal airiness, but compared with German rivals the quality is skin-deep. Good effort, but not for us.