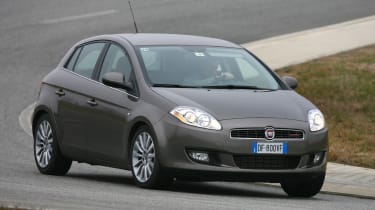 Fiat is most definitely on a roll right now. The humble Panda 100HP proved such a hit here at evo that it became our cover story. Now, hot on its heels, comes the new Bravo, a car deemed important enough by Fiat’s top brass for it to be used to debut a new brand logo.

Turns out they’ve made a good choice, for the Bravo is an honest little ‘warm hatch’ that looks sharp, drives enthusiastically and feels well screwed together. In short, it looks like Fiat has another hit on its hands.

We sampled the two turbodiesel models, both powered by 1.9-litre ‘MultiJet’ common-rail units with a choice of either 118 or 148bhp, but at launch there will also be a pair of 1.4-litre ‘T-Jet’ turbocharged petrol engines (curiously also with either 118 or 148bhp), which, with less weight in the nose, have the potential to be cracking little movers.

If you fancy an oil-burner, though, take the 148. It packs a useful 225lb ft of torque, plenty of get-up-and-go and is mated to a snappy six-speed ‘box to keep everything on the boil (the wheezier 118 makes do with a five-speeder).

The level of detail inside both is impressive; equipment levels are up there with the best and you get a strong feeling that you are getting good value for money.

Find a series of bends and the quick-witted steering reacts crisply, diving for the apex with a tad more body-roll than is ideal, but with detailed feedback and a chassis eager to play. All four wheels become embroiled in the action and there’s enough throttle adjustability to allow the tail to slide if you’re so inclined.