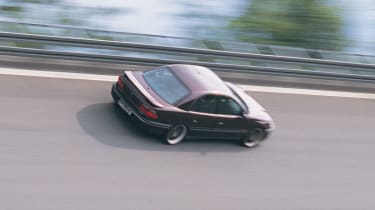 This is surreal. Right now there are four of us sitting comfortably in the leather seats of an aubergine-coloured 1994 Opel Omega. The driver is casually holding the wheel with one hand, chatting about the weather and generally giving the impression that he wouldn’t be more relaxed if he were lounging on his sofa at home. This in itself is all pretty normal, you might think, were it not for one small thing.

You see, the speedo needle has just swept rapidly past the mark indicating 300kph. Then I look down at our driver’s feet to check how hard the throttle is buried into the thick carpet only to see that he’s removed his shoes. He’s closing in on 200mph with three passengers on board and he’s doing it in his socks! I’ve done some scary stuff over the years, but this has to be the craziest situation I’ve ever found myself in, and as we throttle back from an easy 317kph (197mph), I’ve a feeling today is going to get a lot more alarming yet.

Despite appearances, then, this is no ordinary Omega. It may look fairly standard from the outside and, save for a few extra dials and a recalibrated speedo, completely standard inside. But it isn’t. Unbelievably, it has a Veyron-matching 1005bhp, and apparently I’m going to drive it later to see just how fast it’ll really go. Am I scared? Er, yes. Quite a bit actually.

Project Omega is the work of one man, 44-year-old Ole Ringstad, a farmer from Båstad (yes, really) in Norway, and he plainly has far too much time on his hands. Although I’m not sure how. Along with keeping the farm and being a father of four, he also runs Ringstad Automatic Transmission Services (RATS), a small engineering company specialising in upgrading automatic gearboxes.

Not that the Omega’s an auto – it’s fitted with a Dodge Viper six-speeder. All of which begs the question: why? ‘Well, I came by a 1993 4-litre Lexus V8 engine and was left wondering what to do with it,’ explains Ole. ‘I spent ages thinking about it before deciding to slot it into an old Omega. Not many people realise the Omega has a very low drag co-efficient [0.28Cd], making it ideal for big speeds while remaining comfortable. And for me it isn’t a car if you have to trailer it, so I’ve driven it here and I’ll drive it home again.’

He’s brought the mega Omega to the Papenburg test track in northern Germany, just over the border from Holland. As test tracks go it’s massive, and as with similar venues the world over, security is high. Manufacturers use these places to develop new products and therefore photography and filming are banned in case we capture some new secret car that we’re not supposed to. Today, however, we’ve circumvented this issue by employing a chaperone, effectively one of the test track’s workforce who must be present every time we whirl a camera, which means that if we’ve got one in the car, poor Ann-Caterine has to be in it too.

The high-speed circuit we’re using today features a pair of 4km straights, five lanes wide, connected by some of the most fearsome banking I’ve ever seen. It rears up at 49.7 degrees from the horizontal and, as Ole has just demonstrated, can be driven with no hands on the wheel at 250kph (155mph), a speed the monstrous motor delivers without even breaking sweat.

That’s not really surprising considering the amount of work that’s gone into this engine. Only the block and camshafts have remained standard; everything else has been either replaced or modified. The pistons, for instance, are bespoke items made by Cosworth. Even the Vortech supercharger has been heavily uprated to run reliably at 1.65bar of boost. The result is an astonishing 1005bhp at 7400rpm and 744 lb ft of torque at 6700rpm.

Mating the Viper gearbox to a Toyota bell housing was a massively complicated job. ‘The car always seems to be fighting you,’ says Ole. ‘If you don’t want to alter the look of the car you have a very confined space in which to work. Then there are things like the steering, which are more complicated than they first appear. I had to change the standard box for a rack, and the only one produced in the correct dimensions is from a Nissan Almera. Getting rid of the bump-steer was then another massive headache.’

Overall the project took four years, a lot of hard graft and about £90,000 to complete, though a glance under the bonnet reveals the attention to detail.

I’ve brought along our Racelogic box, which not only reads in good old miles per hour, but also works at big speeds. I know this because I’ve seen it before. My personal best was 202.4mph in a Porsche Carrera GT on a German autobahn, while Jethro Bovingdon, the self-styled ‘fastest man in Wollaston’, holds the evo high-speed record at just over 205. If all goes to plan, both records should be smashed today.

Halfway along the back straight is a bridge complete with speed trap and large LCD readout. We position ourselves by the barrier and wait. Ole’s first, appearing off the banking with a huge ball of spray in his wake. He’s not going slow for anyone. As he rips by, we feel the Omega cleaving the air, engine on full song. On the bridge ‘321’ pops up on the LCD display. That’s 199.5mph. In the wet. The man’s obviously a nutter.

Mind you, my definition of what constitutes a nutter is about to be completely redefined. Now the Pontiac is heading our way and, incredibly, it’s noticeably faster, throwing spray even higher. I can barely swivel my head fast enough as it passes. The numbers three, six and seven flash up on the display. That’s 228mph – and he’s still accelerating!

Later Pål calmly explains that he reached 394kph (245mph) at the end of the straight, adding that he could have gone faster if he hadn’t been struggling to put the power down off the banking. He reckons the car could be good for 450kph (280mph) – and who am I argue? – but he won’t find out today as fifth gear failed shortly after that run. But then, as Ole remarks, that’s what this test is for.

With the cars back in, Kenny sets about snapping statics and details of the Omega, and by the time he’s done the track is dry once more. Ole sidles over. ‘OK, Mr Green. Now it’s your turn.’ Gulp.

For this run we’ll be unencumbered by cameras and chaperones, Kenny having positioned himself over at the far banked turn. Ole drives a lap first, explaining the vagaries of the heavy clutch and the banking. Apparently, at the end of each turn, as the track straightens and levels, the car has a tendency to be forced out to the left towards the barrier, so you have to increase the steering effort for a brief second or you’ll hit it. At this point we’ll be doing at least 170mph.

We come in, swap seats and get ready to go. The clutch is heavy in the extreme and, combined with a long first gear and slightly lumpy idle, it’s not the easiest car to get rolling. But we’re away, and the engine’s nicely warm thanks to Ole’s sighting lap.

I take the first few gears easy, only really squeezing the power on when we reach fourth. The Omega surges forward, but not as hard as I’d imagined it would, although this may be a false impression caused by the sheer width of the track.

By the time we reach the banking I’ve popped it into sixth and we’re cruising at an easy 150mph. It’s weird up here. From inside the car, the banking feels almost vertical. Looking ahead as far as I can means peering up at the middle of the top of the screen, as that’s where the track’s scrolling down from. With the end of the corner approaching, I ready myself for the levelling sensation. It’s spooky and uncomfortable the way the car wants to head sharp left, but I’ll soon learn to steer instinctively almost before the car moves.

On the first lap I ease the Omega up to 200 and then 206mph (already a new office record) to get a feel for what the car’s doing before ramping up the numbers. Then I force the pace up to 170mph through turn one and immediately everything changes. The g-forces acting on the car and me are significant. I’m compressed into the seat; my stomach, still full of fishcakes and salad, feels very uncomfortable. Everything’s heavy. Lift an arm and it’s as if someone has tied several bags of sugar to the end of it.

Onto the back straight now, with my right foot hard in. Wind noise is increasing, battling head-to-head against the brutal engine power. Under the bridge at 330kph, Ole starts shouting out the Racelogic numbers: ‘208, 209, 210…’ Everything still feels stable. All my focus is on the approaching banking. How long can I keep going for? There are plenty of revs left – we’re only pulling 6150rpm and it’ll run to 7500 – and speed is still climbing rapidly.‘211, 212…’ I want to keep going but the road runs out soon. ‘213…’ I want one more. ‘214!’ At this speed you don’t need to brake; just backing off has an extraordinary retardation effect, demonstrating just how hard a car has to work to penetrate the air.

‘That was nice,’ says Ole in his usual serene, understated manner, ‘but we need to cool the diff – the oil temperature is off the clock.’ So it is. And this is a clock that runs to 300 degrees…

This is a concern, but I know there’s more to come. I reckon if we come off the banking faster, 220mph may be possible. It seems ridiculous to say it, but this track is too small for the Omega. With an unlimited straight the car could easily score 225.

I cruise back to our temporary base, and our pre-booked easyJet flight home means we’ve finished for the day. I’m not sure how I feel. Relief, frustration, satisfaction and a tinge of disappointment are all mixed in there. The two things I do know are that everything – people included – is still in one piece, and that the fastest thing anyone at evo has ever driven is an Opel Omega. Who’d have thought it?