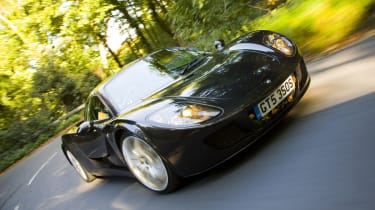 Farbio, act two. Nearly a year ago (evo 113) we drove the first development car, powered by the entry-level 260bhp naturally aspirated 3-litre V6; now, with the eleventh production car currently in build, the narrative has moved on. Now the supercharged model steps into the limelight.

Unfamiliar with Farbio? Then a brief recap is probably in order. This car started out as the Farboud GTS in 2002, complete with in-board suspension and a twin-turbo Audi V6. In 2004 Chris Marsh (ex-Marcos and Invicta) got involved, and two years later he gathered together sufficient funds to take over completely, intent on reducing price and upping numbers.

Out went the race-derived suspension and costly 440bhp German powerplant, in came conventional double wishbones and the 260bhp 3-litre unit from Ford. And since we drove it last, said V6 has been bolstered by the fitment of a supercharger, bringing another 90bhp.

This is the very first GTS350. It’s only five days old, has covered fewer than 200 miles and is privately owned. Not that Dr Mark Kent is a typical owner. The prefix gives away his day job, but he’s also a partner in Trimar Sports Cars of Barnet. It’s the sort of low-key, friendly garage where people pop in for a coffee and a chat as much as to buy or sell a car. This GTS350 is Mark’s personal car, though, and he’s generously agreed to let us take it away for the morning as long as we’re back by lunch – there’s a potential customer coming to drive it in the afternoon.

Parked-up it’s an enticing-looking car – clean, uncluttered, pure, professional. It’s certainly got more visual pedigree than the pair of Nobles nearby, and up close your nose will be brushing the bodywork before you spot any weave in the carbonfibre through the lustrous paint.

The woven bodywork is this car’s USP, the one Farboud element that was retained. Chris Marsh, who’s along as our chaperone, is happy to extol the virtues of the material. ‘It has two chief benefits,’ he says. ‘Low weight compared to GRP and greater build precision, so you can make the panel gaps tighter. Also, carbon doesn’t warp or cure over time like GRP, it stays rigid.’

Chris goes on to explain that a glassfibre body would weigh roughly three times as much. No wonder the stand-out figure on the GTS350’s spec sheet is the 1066kg kerb weight, giving the car a power-to-weight ratio of 334bhp/ton (for reference, a basic 1415kg 911 has 245bhp/ton).

However, this particular car isn’t quite the full deal. Currently the Rotrex supercharger has a 110mm pulley, but this will be changed for a 95mm version. ‘Reducing the size means less inertia,’ Marsh explains, ‘so the blower can deliver a better response and higher pressures. At the moment we have 320bhp, but when we swap the pulley and remap the engine we should be up to the full 350bhp.’

We head out, with motoring ed John Barker driving first. He’s come along because he drove that first Farbio and Marsh wants his feedback on how the car has developed since. Thirty miles later we park-up in the Chilterns. ‘It’s a funny engine,’ says JB, ‘the power is there but the engine is somehow reluctant to give it up.’

We swap seats, accessing the cabin again through those long doors, hunching a shoulder under the A-pillar and then dropping down into the seats. As a first point of contact I find the Sparco Milanos rather firm, but otherwise there’s much to appreciate. The minimalist layout, with heating and sound controls outsourced to the central touch-screen, the tasteful carbonfibre, the way the fat of your thumb nestles neatly in the top of the gearlever and your littlest pinkies curl so easily into the chrome bands on the steering wheel. Practical considerations – often the downfall of cars like this – haven’t been overlooked either. The Farbio has a 220-litre boot, rear visibility that’s marred only by carbon reflections, and genuinely excellent fit and finish.

In fact, the weak link in this particular car is the engine – although I have a feeling we wouldn’t be saying that if the supercharger and ECU had been adjusted. In its interim tune the V6 is occassionally reluctant to idle, a trait exacerbated by an unfortunately sticky throttle pedal, while boost is too little, too late, the whole sensation of acceleration overwhelmed by the raucous sports exhaust of this car. It’s not necessarily a bad thing either, aside from a penetrating drone at around 4000rpm on medium throttle openings. Press harder and the note becomes tougher, more focused, yowling through the last 1500rpm. But always the exhaust dominates. ‘Altering the supercharger will improve that,’ claims Marsh, ‘as we’ll have 0.5bar of boost rather than 0.2bar.’

That will also fatten-up the torque curve, of course. At the moment the touchpaper isn’t really lit until the tacho needle sweeps past 4500rpm – up to that point I fear it would struggle to contain the Impreza STi 330S we have along as our camera car. Thereafter it’s genuinely rapid, but not 4sec-to-60mph fast, as is being promised for the final engine spec, and not quite as rapid as the carbonfibre body would lead you to expect. It’s altogether possible we’ll be eating our words after Marsh has done his tinkering.

The only other significant change since we last drove the car is the addition of electric power steering. It’s initially light and sluggish around the straight-ahead, but once into a corner it’s accurate and writhing with feedback, fully awake. As JB says, there’s much that’s good – the overall balance, the traction and progressive responses under power, and the perfectly judged front damping. But the extra pace works the rear harder and the damping feels a little soft now, while this car’s front geometry needs tweaking too; the nose is distracted by bumps. It doesn’t flow as well as it could, doesn’t feel fully finalised.

The Farbio is highly original, involving and entertaining to drive, but the 350S isn’t yet the livewire it should be. A full power V6 and a couple of days at a test track with a box of chassis bits should sort that out, and that’s exactly what Marsh has planned. Watch this space.