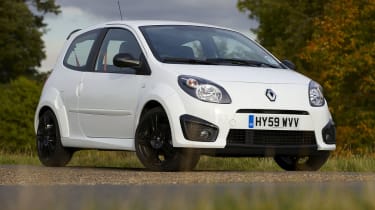 It’s not a particularly savoury topic, but it needs to be discussed as it could affect your enjoyment of this car. You will get sweaty pits if you buy a Twingo Cup. No air-con, you see, not even as an option. What’s that worth to you?

Opting to put up with a sticky shirt will save you £1530, because while the standard Renaultsport Twingo with the Cup chassis pack is £13,325, this new dedicated Cup model is just £11,795. Its suspension has the same 4mm drop and 10 per cent stiffening, and the claimed weight for the car is the same, too (although we’ve been told that ditching the air-con and replacing the two individual sliding rear seats with a fixed bench has saved about 10kg).

There’s a real honesty about this Twingo. On the move it’s a tenacious thing, all eagerness and fizz. It does seem to suffer from more vertical jounce than other Twingos we’ve driven, launching off bumps and generally skipping along, but it does so in such a joyful way it’s hard to be annoyed. Particularly when it’s such a gleeful cornering partner, barrelling in at whatever speed you’ve managed to coax from the yowling 1.6 on the last straight, cocking a wheel and scooting around at undiminished velocity. If you don’t drive it like that everywhere, you’re missing the point of this car and you probably won’t enjoy it.

And the body odour? Nothing a can of deodorant wouldn’t fix.