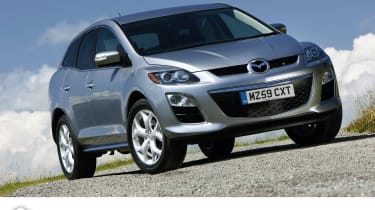 An active torque 4-wheel drive system, which distributes up to 50 percent of the torque to the rear wheels. The CX-7 used to get the turbocharged petrol engine from the Mazda 3 MPS but is now only available with a 2.2-litre diesel engine. There is no automatic gearbox option, which will probably put some people off straight away, but you should read on…

It’s surprisingly good to drive, with a positive feeling of tautness and to all the controls. Blip the throttle and there is instant response (something that diesels normally struggle with). The gearshift genuinely feels like a slightly longer version of an MX-5’s, with the same tight, snickety gate to move the lever through. The clutch is quite strongly sprung and the biting point has a certain snap to it but all though this sounds like a recipe for stalling it’s a pleasingly precise pedal to use and fits the  resolute nature of the car.

The diesel engine clearly won’t set any hearts racing with its performance, but it doesn’t feel quite as sluggish as the figures suggest. It spins cleanly through to its red line too rather than dying off with 1500rpm to go as so many oil burners seem to.

In the corners the CX-7 surprises too. Sure, there is more roll and lean than you would get if you were in an estate, but chuck the CX-7 into a roundabout and you will discover an underlying firmness to the suspension which you can really lean on to carve a precise line into, through and out of one of Milton Keynes’ finest. The steering doesn’t have any feel as such, but what you do get is a decent and consistent weighting and accuracy to the helm.

Unfortunately, because the CX-7 encourages you to drive with a certain vim and vigour, you may struggle to hit the 37.7mpg claimed on the combined cycle. CO2 output is 199g/km