Free tax! That and the promise of 74.3mpg are the main draws here. But what's it like to drive? 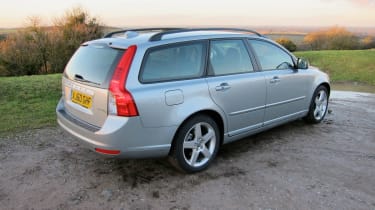 Volvo had a drive event for a bunch of its new cars recently, so we went down to mop up a few things, one of which was the V50 DrivE. The V50’s been around for a fair few years, but in this trim it’s a premium estate that puts out less than 100g/km of CO2. It costs £22,425. Tax, of course, is free.

Now here’s the thing with these sub-100g/km cars. They’ve been engineered to get through a test. Granted, that’s an achievement in itself – the 1.6-litre 113bhp D2 engine here is 15g/km cleaner than the conventional V50 thanks to better aerodynamics, lower rolling resistance Michelin tyres, start-stop tech, lower gear ratios, even low friction oil. But let’s face it, you already know you’re not going to get 74.3mpg, don’t you?

I used to run a long term V50 about six years ago – it was a 220bhp T5 and I quite liked it. It had the usual Volvo faults of a harsh ride that failed to round the edges off bumps and a slightly wayward front end when you put the power down.

With 113bhp, the latter is no problem here, but I’m pleased to report that despite Volvo now having to stand on its own two feet (it used to be part of the Ford empire) positive steps have been taken to smooth off the ride quality. There’s more grumble to the driving than with bigger Volvo’s, but it’s narrow so fits happily on most roads and is actually pretty nimble

It feels tough, the V50, but also small. It’s based on a Focus, after all and doesn’t have the Ford’s driver appeal. Perhaps most importantly, on a cross-country drive I only got 43mpg, where I’m sure a BMW 320eD would have hit 50mpg.

That aside there’s a lack of fussiness about the V50 that’s rather endearing. The interior design is clean, elegant and simple, it has a small, neat gearlever with a small, neat action and I liked the fact that when I got in the first thing I saw in the rear view mirror was a dog guard. Very Volvo.

There aren’t many other premium estate cars that are tax free – in fact I can’t think of any. But as with so many of these low CO2 cars, you save some money but it’s all a bit hairshirt. £22,425 is good value, but a Skoda Octavia estate pushes it hard in most areas – and the 200bhp petrol or 170bhp diesel vRS models are more tempting in my book.

The interior with that floating centre console, is a delight. Buttons are carefully and logically clustered, and there’s a sense of space to the layout that makes the driving environment feel much bigger than it actually is.