First drive of Lamborghini's latest super-supercar on track at Vallelunga. But does it live up to its heritage? 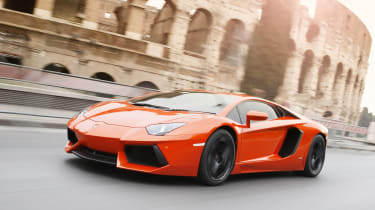 What is it?  In a nutshell, the latest in a long line of extreme Lamborghinis featuring scissor doors, mid-mounted V12, four-wheel drive and towering performance. Although it bears a visual similarity to the limited-production Reventon, it's actually all-new from the tyres up. Technical highlights?  The main point of interest is the all-new V12, which finally breaks away from the Bizzarrini-engineered original, which has been around in its basic form since 1963. With a shorter stroke, it revs more freely, delivering its power more evenly across the rev-range.

Carbonfibre monocoque is a Lamborghini first, resulting in a lighter, stiffer body, as is the F1-style pushrod suspension. New seven-speed ISR clutchless manual with paddle shifter, and three dynamic modes, from Strada, through Sport to Corsa. Interior features all-new LED instrument panel, with two display modes. All-wheel drive system is now by Haldex IV with electronic torque split, and active aerodynamics. What’s it like to drive?  Like the Murcielago, only 20% better in just about every department. Soundtrack is crisp, loud and addictive. The new engine delivers more performance and driveability, thanks to a more even power spread, gearchanges are even quicker – albeit too violent in Corsa setting. in slow speed corners, it's sensitive to entry speed and dynamic mode, so can understeer or oversteer depending on how you manage throttle inputs. Exit traction is sensational, and in Sport and Corsa mode, it's permissive enough to allow oversteer without scaring the switched-on driver too much. In high speed corners, it generates huge lateral grip, and changes direction beautifully, almost viciously – and feels stable and planted.

Straightline speed is crushing, as you'd expect with 691bhp, but that excellent traction lulls the driver into thinking it's not actually that fast. And it is. In fact, you'll need to take time to adjust to how mind-bendingly quick it is. Brakes are powerful and strong, but there were slight inconsistencies between the cars we drove, and at times on the circuit, it felt like it was struggling hauling the Aventador down for the corners. Driving position and cabin are excellent, although visibility is predictably dire. How does it compare?  The line between supercar and hyper-car has been blurred with the arrival of the Aventador, and with nearly 700bhp for £211,000 it actually offers – relative – value for money in terms of power for your pound. It's difficult to think of it in terms of rivals, other than the car it replaced in SV form, in which case it's noticably better in just about every respect. And just like its wild predecessor, it's a slightly flawed gem, but all the more loveable for it. For now, though, if you want a mid-engined supercar with all the heritage that comes with the Aventador, there's nothing to touch it.  Anything else I need to know?  Lamborghini CEO and President Stephan Winkelmann confirmed that 18 months' worth of production is already sold (about 1100 cars), so if you are thinking of buying, and aren't yet on the list, be prepared to be patient.