Subaru's new soft-roader is smaller than the Forester and intended to take on posh rivals like the Audi Q3. Can it get close? 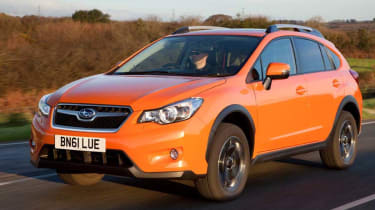 It's a new SUV from Subaru, Impreza-derived but smaller than the established Forester (the next generation of which is set to get bigger.) The XV is less the traditional, square-cut, workhorse Subaru 4x4, more a lifestyle soft-roader designed to appeal to those who might consider an Audi Q3 or Nissan Qashqai.

After the recent run of seriously ugly Subarus (Legacy, current Impreza), the neat, crisp-edged but shapely XV is a welcome visual respite.

It's the usual Subaru cocktail of a flat-four engine, longitudinally-mounted with the gearbox behind it. The six-speed manual gives a nominal 50/50 front/rear torque split via a viscous centre diff, while the CVT auto uses a multiplate variable-slip clutch which starts out at 40/60. That 'Lineartronic' CVT, with a six-step manual override to give six virtual gears, is optional only with the petrol engines.

There are two of these, a 2-litre with 148bhp and a 1.6 with 112bhp. They use the new-generation cylinder block found also in the BRZ and Toyota GT86, but not those cars' direct-injection cylinder heads. There's also a 145bhp, 2.0-litre turbodiesel.

Impressive, mainly. The diesel is the one to have, with an easy overtaking thrust, a crisp response with minimal turbo lag and remarkable running smoothness. It suits the XV's character well, and has much the best performance figures as well as equal-best claimed economy.

There's lots of ground clearance but you don't feel as if you're sitting unnaturally high in your comfortably car-like driving position. Firm suspension keeps roll angles low, steering precise and cornering tidily capable, but the penalty is a busy ride at speed over undulations that's a disappointment given the suspension's surprising suppleness over small, sharp lumps. There's quite a lot of road and wind noise, too.

A splash and bash around Rockingham circuit's off-road course showed the XV to be effective on terrible terrain even on normal road tyres. It didn't ground-out once, and the electronic, wheel-braking traction system helped keep it moving. There is neither a low-range setting nor a mechanical diff lock, but it gets by without either just as, say, a Freelander does.

We also tried a Lineartronic petrol XV 2.0, whose CVT managed to avoid the excessive revving under moderate acceleration that spoils some such systems. But you're still aware of much mechanical, rotational activity which seems to be going nowhere instead of giving the XV the accelerative punch it needs. It's OK for trundling around but not very satisfying if you're in a hurry. Sadly, neither engine has any trace of the usual Subaru throb. It has been genetically excised from the brand DNA.

There is pleasure to be had from knowing you're driving something with a unique mechanical layout, when all the rivals are derived from a transverse-engine, front-wheel drive starting point. Price-wise the XV undercuts a Q3 but is no bargain, although its various trim levels (S, SE and Lux Premium) are generous. Somehow it feels more ready for off-road adventures than its prissier rivals, yet there's no on-road penalty for that feeling.

A very strong selling point is Subaru's new ETC (Everything Taken Care of) warranty, which covers you for three years for small dents and scrapes, wheel nicks, the first MOT (with up to £300 of repair work), monthly cleans, annual valets, wheel alignment, winter tyre storage, accident management, key loss and collection/delivery for servicing. It's an impressive offer, which also has the benefit for the dealer of keeping the relationship with the customer alive.

The diesel has a 146g/km CO2 rating (same as the Lineartronic 1.6), prices range from £21,075 to £29,810 – and the XV's arrival is being promoted by Subaru's new take on advertising which plays down the technical stuff and plays up the way these inherently unusual cars can fit into your busy, take-control-of-it lifestyle. 'Are you Subaru?' it asks. Lacking a pair of running shoes, I apparently am not. I also don't use Avon cosmetics, on which basis I apparently am. Baffling, isn't it?