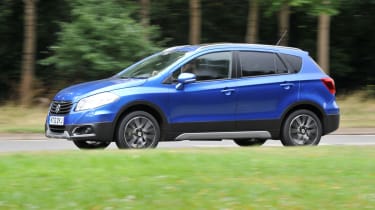 The Suzuki SX4 S-Cross. It’s a small crossover with optional four-wheel drive and a bias towards good value for money. That’s an ingredients list not often used in recipes of cars we like at evo, but a bit like the Skoda Yeti – an unexpected family car hero – the S-Cross manages to dish up more than its dowdy looks suggest. Prices start at £14,999 for a petrol-powered front-drive model; add £2000 to go diesel or £1800 if you want all-wheel drive.

The engine range is one of the simplest you’ll find anywhere – one petrol, one diesel. The former is decidedly old-school in concept, a naturally aspirated 1.6-litre unit with just 118bhp and 115lb ft, a requirement for lashings of revs if you want to make progress and the option of five-speed manual or CVT automatic transmissions. Despite this, though, its fuel economy and CO2 figures – 51.3mpg and 127g/km – are impressive, especially given the S-Cross’s Nissan Qashqai-like size.

The turbodiesel engine is also 1.6 litres in size, possesses the same 118bhp but a much stockier 236lb ft and just the one gearbox option – a six-speed manual. Despite its extra punch, though, the petrol holds the best performance figures – 0-60 takes just under 11sec while its top speed is 111mph. The diesel’s upside is, as you’d expect, superior sensible figures, with 67.2mpg and 110g/km claimed if you go two-wheel drive.

The four-wheel-drive system, called Allgrip (whatever happened to ‘4x4’?), has four modes – Auto, Sport, Snow and Lock. Auto stays as front-drive until grip conditions call on a spread of torque between axles, while Sport sends 20 per cent more power to the rear wheels under heavy throttle while also increasing engine speed by 500rpm. There’s a noticeable sharpening of the throttle when it’s toggled. Snow is for low-friction surfaces (as you’d expect) while Lock is designed for extricating the car from such conditions.What’s it like to drive?

This is the area where the S-Cross shines, though. It’s far from a dynamic stormer, but there’s a deftness to the way it handles that might surprise you. The steering is a good start. It’s as feel-free as most modern racks, but with a decent amount of weight to it and sharp, direct responses, it might provide you with more enthusiasm than you were expecting.

The damping is well sorted, with only the harshest of bumps or potholes majorly jarring. Suzuki is good at this sort of thing, the Swift Sport being streets ahead of a lot of hot hatchbacks when it comes to composure. Like many of its models, Suzuki carried out some of the S-Cross’s chassis development on UK roads, and it shows. We were driving an Allgrip car and never felt power noticeably being shuffled around, but grip levels were high and consistent – it’s an easy car to read and as such, a fun one to try and cajole thanks to its keen steering. Inevitably that tall shape ensures body roll is never far way, but with an impressively low 1240kg kerb weight (or as little as 1175kg if you go front-drive), there’s more agility here then the looks suggest.

The petrol engine we sampled would be fine in a Swift but is exceedingly underpowered here, though if it’s warmed up and you’re willing to use all of the revs, it’s possible to maintain decent momentum. While naturally aspirated engines thrill in hot hatches and sports cars, though, a car like this is ripe for some turbocharged torque. The diesel is perhaps the better choice, but a high price premium ensures it’ll take a decent amount of miles to pay itself off.

Overall, this is a car that will be bought purely for sensible reasons. But as a high-riding, value for money practical option, it’s one with keener dynamics than perhaps it needs. Refinement isn’t bad, either; the engine is a little vocal when revved but at cruising speeds it blends into the background quite nicely.

Look at it from the rear three-quarters and you’ll probably mistake it for a Nissan Qashqai, such is its shameless rivalling of its fellow Japanese crossover. It’s around £2000 cheaper, model for model, and is probably sharper to drive. Our favourite crossover is the Skoda Yeti . Prices start at £15,250 for a 1.2-litre turbo, while four-wheel drive is only available on bigger engined versions.

Anything else I need to know?Suzuki claims the S-Cross’s panoramic sunroof is a world first, with two panels sliding over both front and rear passengers to create a 560mm aperture, one of the largest around apparently. It’s very pleasant, but probably not quite the ‘invigorating open roof experience’ Suzuki claims. A reversing camera, DAB digital radio, satnav and Bluetooth are standard on higher-spec cars.