Renaultsport’s smallest creation, the Twingo 133, has had a makeover as it attempts to take on the Suzuki Swift Sport in the supermini stakes. 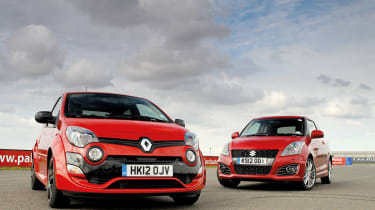 Harrying each other down these narrow lanes and hounding each other’s jinking tyre tracks, the two superminis feel right at home. Most cars feel unwieldy up here, like aircraft carriers trying to negotiate the Kennet and Avon Canal, but the Renaultsport Twingo and Suzuki Swift Sport are just fine. The Surrey Hills hail from a bygone age of motoring; slim strips of tarmac snaking between high earth banks, which themselves are held together by the roots of the trees towering high overhead. In places the emerald leaves of the arboreal canopy block out all but a thin latticework of sky, making it seem dark even on the sunniest of summer days and adding to the tunnel-like feeling of the confusing rabbit warren of roads.

The tarmac is bumpy too, where roots have pushed up the surface like bulging veins in a forearm (unless you venture across to the hairpins of Box Hill, freshly laid for the Olympic cycling events). It’s about as severe a test as you could find for two full sets of MacPherson struts and torsion beams, and one of the duo is dealing rather better with the corrugations and crenulations than the other…

Hasn’t the Twingo come a long way? Two decades ago a strange, sleepy-eyed little box of a car emerged, available only in left-hand drive and only across the channel.  Inevitably a few trickled across here, but it always seemed slightly unfair that we never got our own version. Can you imagine the French keeping all the Camembert to themselves? Anyway, given that that first-generation Twingo went 15 years without any discernable facelift whatsoever, it’s amazing that the second generation has been nipped and tucked around the jowls after only five years on the market.

Well, nips and tucks haven’t really entered the equation, to be honest. It’s more like this 133 version has just charged headlong into a lighting factory and seen what sticks. I’ve never seen so much illumination on the front of a car outside of a forest rally stage at night, yet amazingly, when you see it for real, it all seems to work. Styling apart, there haven’t been many changes, the main ones being in terms of spec so that it can compete more keenly with the other car in this test.

The Swift Sport really couldn’t be a better match for the Renaultsport and if the two were squaring-up and weighing-in for a boxing match, then it would be too close to call. Both have 1.6-litre naturally aspirated engines that produce exactly 118lb ft of torque at 4400rpm. Both claim an identical 8.7sec for the 0-62mph sprint. Their power outputs are just 3bhp apart (in the Swift’s favour) and their bantam-like kerb weights are separated by a mere 5kg (the Swift being the lighter). Even the wheel and tyre combos are nearly identical, both running on 17in-diameter alloys with 195-section ContiSportContact 3 rubber. I’m surprised they didn’t both go for the same shade of Farrow & Ball.

Clamber into the Twingo and there’s an instant sense of fun. For some reason, it reminds me of one of those Fisher-Price children’s cars (with the red body and yellow roof). Perhaps it’s the shape of the instruments and the overall silhouette of the car. Anyway, the Renaultsport feels a little childish, but in a good way, like playing on the swings and climbing frame in the park when no-one’s looking (I really hope it’s not just me who does that). It does look as if the steering wheel has been made a lot bigger than it really should be, and you also feel perched up high on the seat, but the engine buzzes into life enthusiastically.

The gearshift on our fairly box-fresh car is somewhat tight, as though some nylon bushes need to wear in, but the steering instantly feels engaging with no slack at all around the straight-ahead position. Ally this to an engine that is joyfully eager to be thrashed round to its red line at every opportunity and you have a car with exactly the brimful-of-brio temperament you expect in a hot hatch. Down the twisting, narrow lanes, the little Twingo’s pointy, reactive steering makes it an ideal companion, as you need to be able to place the car you are driving very accurately. Despite quite a tall profile that makes it look as though it might roll like a ship on a swell, there’s actually very little roll and a lot of lateral grip too, so it won’t pick up an inside rear wheel as easily as you might imagine.

This car’s firmer and lower ‘Cup chassis’ set-up (which also includes those 17in wheels) is a £700 option, but one we’re used to praising on the Clio and Mégane. Here it increases the insatiable, puppy-like nature of the Twingo and as staff writer Stephen Dobie says, ‘It prickles your enthusiasm from the moment you get in.’ However, there is also a downside to the suspension, and it manifests itself in the form of a ride so solid that driving quickly down a B-road you can find yourself being launched out of your seat over bumps. Fortunately, there’s a decent amount of headroom.

Up to a point it makes the car feel lively, but press harder down a typical B-road (not just those in the Surrey Hills) and it starts to get in the way and frustrate, as you’re left with the impression that at times the car is travelling as far vertically as it is down the road. You notice it under braking too; there’s wonderful response and power right from the top of the pedal, but trail-brake slightly into a bend or even in a straight line over bumps and all too often you find the pedal going hard under your foot and the ABS triggering. A lack of travel in the suspension seems to be the biggest problem, although a bit more rebound damping might help too.

Lunch is sought at the legendary Peaslake post office and then eaten, as usual, in the bus shelter opposite. We probably should have splashed out as it’s photographer Gus’s birthday, but he professes delight with a mug of tea and a cheese straw. Suitably sated, I head for the Swift and as soon as I get in it feels very different to the Twingo. It’s much more sober, much darker, more grown-up, but also with a much better steering wheel and driving position (although the latter could be lower still). Press the starter button and an extra layer of sound-deadening means the engine seems slightly softer and more distant as it comes to life. If you got into one at an airport, you might assume you’d been unwittingly upgraded from the ‘what’s the cheapest thing you’ve got?’ category by the hire car company.

For all the ‘big car in a little car’ qualities, however, it feels a bit dull as we set off into the lanes again. The steering is accurate but a little lacking in weight compared to the Twingo’s and feels slightly soft-focus around the straight ahead. The engine sounds good when you start piling on the revs, though, with a hard edge to the Japanese four-cylinder buzz. The gearshift is much more crisp too, with a shorter, more pleasing throw, although the ratios feel taller than the Twingo’s, despite an extra (sixth) gear. And while the red line is north of 7000rpm, there’s a natural change-up point at about 5500rpm, after which the revs begin to labour a little.

If you were to go on a normal ten-minute test drive from a dealer in each car, then the Suzuki might leave you a little cold after the exuberant Twingo. It has certainly matured a bit compared to the previous-generation Swift Sport, which, let’s face it, sounds quite dull. But… if you dig a little deeper, push the chassis a little harder, you suddenly start to realise what a talented little car you’re driving. Just at the point where the Twingo starts to get ragged and makes you want to back off, the Suzuki begins to reveal how good it is. The suspension is some of the best I have come across – it’s hard to sing the praises of the damping highly enough. The way it soaks up the bumps and lets you attack any road is simply extraordinary.

The Swift remains calm and quite four-square flat underneath you; very neutrally balanced with a smidge of push at the front if you lean on it, but a bit of restorative pivot if you lift off the throttle. Throw it at a corner at speed and you have faith that it will deal sublimely with any unexpected mid-bend lumps, leaving you to look up and ahead to prepare for the next corner. That's immensely helpful in keeping the flow going, which is important if you’ve only got 130bhp to hand. After a while you begin testing the Swift, searching out the bumpiest roads you know, routes you’d previously avoided because of their wicked compressions or disruptively decayed asphalt. It actually reminds me of the suspension on my old Swift rally car, and that had Proflex dampers that cost £1500 a corner…

As the day goes on and the lanes get narrower and more confusing, Stephen and I continue to swap cars, and then over the next few days I drive both the Twingo and the Swift on evo’s local roads too. It really is extraordinary that two cars that look so similar on paper and seem to be aiming at exactly the same market can be quite so different in character.

On the track, as you can read below, the Twingo claws back some ground again, the Cup chassis at home on the smooth surface and the handling marginally more entertaining with its more incisive turn-in and edgier feel. On a purely practical day-to-day basis, although both are well-specced with air-con and even cruise control, the Swift is the easier car to live with, as its sixth gear soothes motorway travel and the suspension deals with daily inconveniences like sleeping policemen rather less spine-shatteringly. It’s swings and roundabouts.

So which to choose? Well, the Twingo looks great, is a wild ride and if it’s your first foray into the world of evo cars then it would be jolly exciting. It would be fun on the occasional trackday as well. But after you’ve got over the initial buzz, when you actually want to concentrate on tackling a set of corners with some poise, the bounce and bump of its suspension mean you have to back off just when you really want to push on the most. We’ll try a non-Cup version soon to see what difference that makes, but for now it’s not quite the sparklingly finished hot hatch that we’ve come to expect of Renaultsport.

The Swift could do with a little of its predecessor’s more spirited on-limit character to complete the picture, but there’s no doubt that it wins this test. Snicking through that lovely gearbox, lining up each corner with confidence, feeling the suspension working with the tarmac, not letting an ounce of precious power scrabble away, almost floating through a corner when you get it right… it is a beguiling little car.