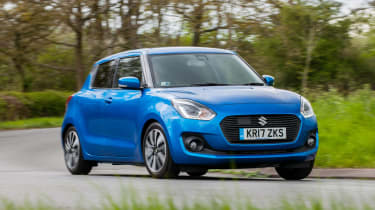 The Suzuki Swift has always been a bit of a hidden gem. Even if you ignore the highly entertaining Swift Sport model (which proved the final bastion of the naturally-aspirated hot hatch), regular Swifts packed revvy engines and nimble chassis.

Now in its sixth generation, the Swift is back to provide a value alternative to the mainstream offerings from Ford, Vauxhall, Renault and more. But has it lost its sense of fun?

The Swift’s engine is a 1-litre, three-cylinder turbocharged unit under the brand name “Boosterjet”, putting out a respectable 109bhp at 5500rpm, and 125lb ft of torque in a band between 2000-3500rpm. According to Suzuki’s figures, that’s good for a 10.6-second 0-62mph time and a 121mph top speed, with claimed combined economy of 65.7mpg. 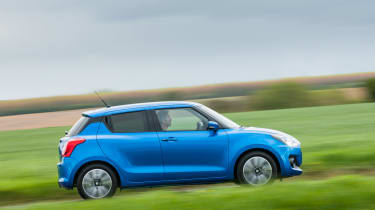 With Suzuki’s SHVS hybrid system (detailed below) you get a five-speed manual gearbox with this particular engine, and front-wheel drive, though automatic transmissions and all-wheel drive are also available depending on spec.

In top-spec SZ5 trim the Boosterjet-equipped Swift has been combined with Suzuki’s SHVS hybrid system. This mild hybrid setup uses an integrated starter generator to feed energy to a small battery mounted under the passenger seat, which can then be fed back into the drivetrain for gentle assistance in certain situations.

There are a few benefits to this system. It’s relatively inexpensive as hybrid systems go, but fairly effective at filling in the torque gaps present in small engines. It’s also light, so doesn’t greatly affect kerb weight, and can be used to stop and start the engine quickly; it’s among the less obtrusive stop-start systems we’ve used. 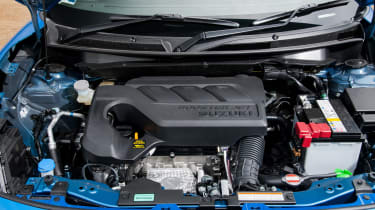 We’ve a strong suspicion that the engineers behind the Swift enjoy their driving, as this latest model, like its predecessor, has surprising driver appeal.

Not necessarily on first acquaintance though. Most other modern superminis have more imaginatively designed cabins, and a more touchy-feely approach to their dashboards and trim. There's good forward visibility thanks to a Mini-style upright windscreen and it feels well-built, though that's as far as surprise-and-delight features go.

But if you appreciate the small pleasures that can come from clutch and gearbox combination that feels well matched, a throttle that responds to the smallest of inputs, or steering that weights up naturally and responds accurately as you aim towards an apex, then you’ll probably like what’s going on here. 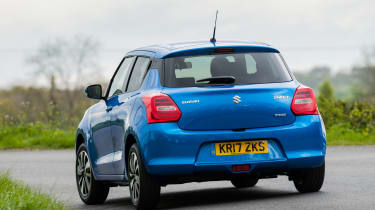 The combination of Suzuki’s turbocharged engine and the mild hybrid system is a particularly satisfying one. Most economy-biased small cars these days require a good stab of the throttle for them to wake up the turbocharger, but the smallest of prods here gets a response. The hybrid element probably has a hand in this at low revs, but the turbocharged three-pot provides eager, noticeable urge even below its 2000rpm torque peak.

It’s a good match for the chassis, which in turn benefits from the Swift’s low weight. Linking a series of bends together is actually quite enjoyable and having decent levels of go under your right foot means you aren’t left feeling deflated by a lack of enthusiasm, as you are in so many other modern superminis.

The body is generally well controlled, there’s enough grip to make decent progress, and there’s decent natural balance, so you aren’t constantly fighting against the stability control. Some may find the ride a little firm by supermini standards, but it’s a long way from being uncomfortable and there’s enough pliancy to make fairly light work of broken country roads - the occasional kick through the steering or shudder from the beam-axle rear end aside. 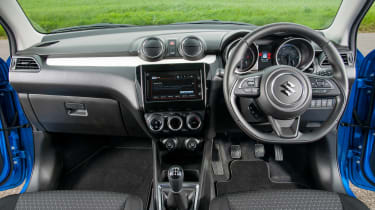 The Swift range starts at £10,999 for a 1.2-litre, naturally-aspirated four-cylinder model in SZ3 trim. A non-hybrid Boosterjet is £12,999, which then jumps to £14,499 for the well-equipped and hybrid-assisted SZ5 tested here. Standard SZ5 kit includes a touchscreen infotainment system with CarPlay, 16-inch alloy wheels, adaptive cruise control, keyless entry, automatic air conditioning and more.

Those prices are entirely reasonable for the class; for reference, a 99bhp Ford Fiesta 1.0 EcoBoost in Zetec trim cost £15,445 and delivers similar performance to the car tested here. The only other supermini capable of interesting keen drivers is the Mini. Swift SZ5 money also gets a Mini One (£15,250), which might not have the sporting kudos of the Cooper but still hits 62mph in 10.1sec and has a similarly enthusiastic three-cylinder engine and agile chassis.