Now in its second generation, the Suzuki Swift Sport manages to mix effervescent performance with everyday useability. When it arrived in 2011, its arch rival was the Renaultsport Twingo 133, but the French warm hatch’s demise means the Swift is part of a dying breed – recent rivals from Renault, Ford, Peugeot, Mini and more have all been turbocharged.

It’s among the reasons that, despite its less economical (on paper) and less efficient naturally aspirated engine, we’re fans of the Swift. For those seeking an experience more akin to that of hot hatches of yesteryear – not necessarily high-performance, but interactive, revvy and fun – the Swift is arguably the strongest contender on sale today. That it's also relatively inexpensive next to even basic modern superminis, with pricing from £13,999, makes it even more appealing.

For 2015 Suzuki gave the Swift DAB radio and satellite navigation as standard. The touch-screen unit not only adds another layer of functional practicality to the warm hatch, it means the car is probably the best value offering in this segment.

‘If you were to go on a normal ten-minute test drive from a dealer in each car, then the Suzuki might leave you a little cold after the exuberant Twingo. It has certainly matured a bit compared to the previous-generation Swift Sport, which, let’s face it, sounds quite dull. But… if you dig a little deeper, push the chassis harder, you suddenly start to realise what a talented little car you’re driving. The suspension is some of the best I have come across – it’s hard to sing the praises of the damping hard enough. The way it soaks up bumps and lets you attack any road is quite simply extraordinary.’ – Henry Catchpole, features editor (Renaultsport Twingo 133 v Suzuki Swift Sport, evo 175)

When drivers jump out of old hot hatches such as the Peugeot 205 GTI or Citroën AX GT, they’ll often proclaim that ‘they don’t make them like this anymore’. Well they do, because while the Suzuki Swift Sport is vastly more refined, reliable and useable, its handling and ethos is not too dissimilar to that of those pioneering models.

Okay, in 2015 it’s far from hot – some diesel superminis get close to the Swift's performance these days – but for an honest warm hatch experience, we’d look no further. It’s also far more mature than the lipstick-wearing Ford Fiesta Zetec S Red/Black Edition… 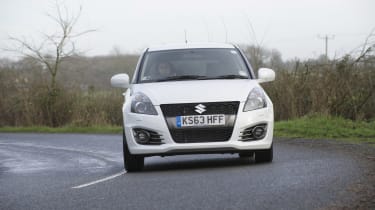 > Ride and handling - Mature damping makes for a pliant ride that matches the car's overall old-school demeanour. On track you'd want something firmer, but on country lanes it's a capable setup. Read more about the Swift Sport's ride and handling here.

> Interior and tech - Lots of standard kit and a clean dash make the Swift Sport a pleasant place to spend time. We just wish that seat would go a little lower... Read more about the Swift Sport's interior here.

> Design - To the untrained eye, the Swift Sport might blend in amongst other superminis, but those in the know will recognise a rear roof-spoiler and twin-exit exhausts as signals for its performance. Read more about the Swift Sport's design here.