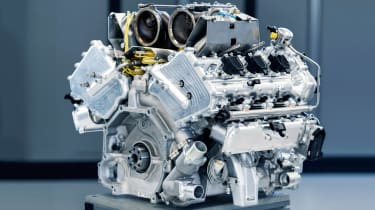 V8s and V12s have defined much of Aston Martin’s history, but from 2022 that’s set to change, as Aston Martin has today revealed the new V6 engine that will power its Valhalla supercar.

While the company hasn’t yet revealed technical specifications for the engine, it has confirmed a few key details. Firstly, the V6 will be three litres in capacity and its twin turbochargers will sit in a “hot vee” layout - much like the turbos in the AMG-supplied V8 already used by Aston Martin.

As well as the packaging benefits of a lighter, more compact unit, important for slotting the engine into the Valhalla’s mid-engined layout - something enhanced further by a dry sump system - a hot vee layout also means a shorter, faster path for exhaust gases to travel for improved throttle response. It benefits cooling too, with greater separation between the hot parts of the setup - the exhaust system and turbine - with the intake plumbing and intercoolers.

Another key detail is that the powertrain will be electrified, something Aston Martin says was incorporated from the start and will help the unit meet emissions targets, with the company claiming Euro 7 compatibility. 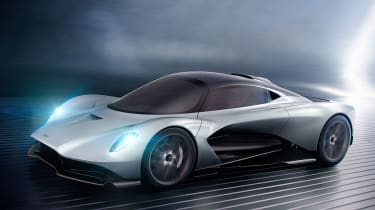 Power and torque figures will vary depending on the application - the Valhalla won’t be the only Aston to use this engine in future, that’s for sure - but Aston Martin has already confirmed it will be the most powerful drivetrain in its range.

The engine carries the internal code of TM01 - a nod to Tadek Marek, the Aston Martin engineer who, in the 1950s and 1960s, was responsible for developing both the DBR2’s aluminium inline-six, and the firm’s V8 engine. Current powertrain chief engineer Joerg Ross said that Aston Martin wanted to create something befitting of Marek’s name, with more freedom to explore and innovate with this project than the team has had for a long time.

The Valhalla itself is benefitting from lessons learned from the Valkyrie project, though as the company noted at the concept’s debut at Geneva in 2019, the car will be a “distillation” of the Valkyrie rather than a dilution, less extreme in some areas but offering a different experience in others - and should prove a worthy rival to cars like the Ferrari SF-90.

Aston Martin Valhalla: what we know so far

Aston Martin's Valhalla is the firm's second hybrid supercar collaboration with Red Bull. Previously codenamed AM-RB 003, the car will join the Valkyrie at the top of Aston Martin’s range as a rival to the more accessible, not to mention usable, near-1000bhp hypercars of the near future, including Ferrari’s SF90 Stradale and McLaren’s P1 replacement that's due later in 2021.

Like the Valkyrie, the Valhalla is being developed in partnership with Red Bull Advanced Technologies, who will shape and sculpt the aerodynamics with an F1-like precision and focus on the optimisation of the Valhalla’s chassis. Aston Martin’s Matt Becker and Chris Goodwin will concentrate on the car’s dynamic set up.

> Click here for more on the Ferrari SF90 Stradale

According to Miles Nurnberger, Aston Martin Director of Design, while Valhalla is heavily influenced by Aston Martin Valkyrie, it is very much its own car: “We were quite deliberate in Valhalla to not disguise its lineage, but we were equally emphatic that it would be a distillation of Aston Martin Valkyrie and not a dilution. The design isn’t as extreme in some areas, but it pushes just as hard in others, and is even taking certain ideas and concepts a step further. That’s a natural function of design evolution, but also testament to just how great an influence working with Red Bull Advanced Technologies on Aston Martin Valkyrie has had on our approach to everything that’s come since.”

The chassis will be based on developments made on the Valkyrie project, underpinned by a carbonfibre structure. It is as yet unknown whether the mid-mounted powertrain will act as a structural member of the chassis in the same way as the Valkyrie, but its higher degree of road-bias makes this a less likely scenario.

The panels will also be carbonfibre, with shaping and sculpting honed by the aero boffins at Red Bull Racing as previously mentioned. There will be plenty of new tech on offer too, with the proposed world-first road-car application of ‘FlexFoil’ technology integrated into elements like the rear wing, which gently changes shape without the need for drag-inducing joint-lines. A large proportion of the Valhalla’s downforce will be produced via the underbody though, keeping drag to a minimum. While the car’s overall shape has been influenced by the Valkyrie and its aerodynamic needs new lighting clusters endow the Valhalla with its own identity despite using the Valkyrie’s internals due to their lightness. All four lights combined weigh less than a single DB11 headlamp.

As a less extreme model than the Valkyrie, the Valhalla needs to be more user-friendly and comfortable and to offer improved interior space. The doors have been redesigned so the forward opening butterfly items, like the ones often seen on LMP1 Endurance racers, take with them a section of roof aiding ingress. A rear shelf has also been integrated to accommodate extra luggage-carrying capability, and the centre console has also been widened, giving occupants more shoulder room and increased space for small item storage.

The dash itself is all-new, with a state-of-the-art minimalist design that almost doesn’t look much like it has a dash at all. The steering wheel, pedals and driver display were all designed and developed for ideal ergonomics first, with the multi-function steering wheel itself set to include a small digital interface controlling most of the car’s functions. Although it does without any formal central infotainment system, drivers can attach their phones to a central prong for added functionality.

As the next-step in Aston Martin’s incredibly fast-paced production car development in the last few years, it is not surprising to see Aston Martin pushing new manufacturing methods like 3D printing in the development of new interior components and finishes. One example is the thin centre console, which reduces material use by as much as 50 per cent thanks to the flexibility of 3D printed manufacturing.

Aston Martin has indicated that production will be limited to 500 coupes, with first examples reaching customers in late 2021. But as only one step in Aston Martin’s future plans, the Valhalla will be joined soon after by a McLaren 720S-rivalling supercar, which was previewed at the 2019 Geneva motor show by the Vanquish Vision concept.