The Nürburgring Nordschleife has become a benchmark location for the modern performance car, and we’ve listed the top ten fastest ever laps 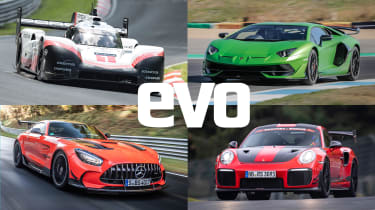 The Nürburgring Nordschleife: 12.9-miles and 154 corners of tarmac that undulates its way  deep in the Eifel mountains. Its constant changes in gradient and articulation make it one of the world’s most challenging circuits – a perfect place to test performance cars, and more recently a place to break records in the world’s fastest cars. It’s an amazing place, and with manufacturers fighting amongst themselves to break the sacred lap record, we’ve run down the top ten fastest of all time.

Though it’s far from an objective indicator of a car’s overall performance, there’s no denying that a machine with a Nürburgring lap record earns a level of respect from any enthusiast. As a symbol of pride then, not to mention a very useful marketing tool, the ‘Ring remains king. 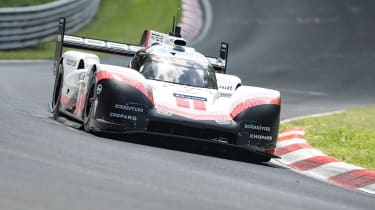 To celebrate its 70th anniversary, Porsche took its 919 Evo – a modified version of its Le Mans-winning 919 Hybrid – to set lap records at a handful of European circuits. The 919 Evo obliterated the all-time Nordschleife lap record, with driver Timo Bernhard completing the lap in just 5:19.546 in June 2018 – that’s almost an entire minute faster than the previous record.

Under the skin is the same hybrid powertrain as the 919 Hybrid, but as it’s free of the restrictions of the racer, total power was rated at 1144bhp – especially mind-boggling when you consider its 849kg dry weight. This was achieved through the removal of unnecessary items such as air conditioning, windscreen wipers and headlights.

It’s aero was also tweaked, with the now-active system able to generate 53% more downforce than the 919 Le Mans-spec racer whilst also increasing aero efficiency by 66% – allowing for a peak speed of 229mph during its run. 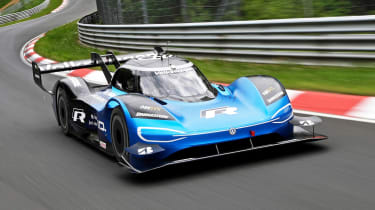 Coming in second place is Volkswagen’s purpose-built, all-electric ID R. Despite the compromises of an all-electric powertrain on the circuit, VW’s engineers managed to extract enough performance for a 6:05.336 lap in June 2019, not just taking second spot, but also breaking the electric vehicle record.

It’s powered by the 670bhp motor and 44kWh battery pack from the brand’s Formula E racer, and hit an average speed of 128mph over the 12.9-mile course, with its aerodynamic setup fettled to suit the unique characteristics of the Nordschleife.

> Volkswagen ID R: everything you need to know 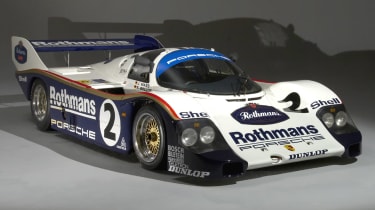 The outright record was long-held by the late Stefan Bellof for 35 years, until the aforementioned 919 came along in 2018. In May 1983, the then 25 year old racing driver set an astonishing time of 6:11.13 in a Porsche 956 during qualifying for the Nurburgring 1000km.

After this date, top-level Le Mans prototypes no longer used the 12.9-mile Nordschleife for competition, with the GP circuit also added as part of the lap – hence why the record around the Nordschleife stood for so long.

Proving just how committed drivers were in the golden age of endurance racing, not to mention what an incredible Nordschleife weapon the Porsche 956 is, it also takes the fourth spot on this list. On the same day as Bellof’s famous lap, German driver Jochen Mass achieved a time of 6:16.85.

Next on the list was another lap from 1983, with UK-based March Engineering bagging fifth place on the all-time list with its 832 Formula 2 car. Piloted by Christian Danner, the racer was powered by a 2-litre naturally-aspirated BMW four-cylinder, a unit that also saw action in Brabham’s famous BT52 Formula 1 car (albeit in 1.5-litre turbocharged-form). 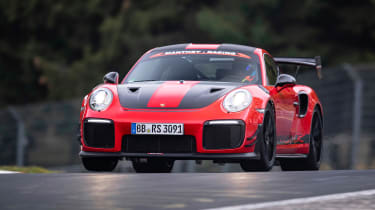 Porsche racing experts Manthey Racing decided it would take the 991.2 911 GT2 RS to the next level. Fitted with its MR conversion kit, consisting of various tweaks to aerodynamics, the suspension setup, braking system and cooling, the 691bhp supercar lopped almost seven whole seconds off the standard GT2 RS’s 6:47.25 time.

It is worth noting that as with many recent records, this time is without T13, knocking 200m off the total lap length. 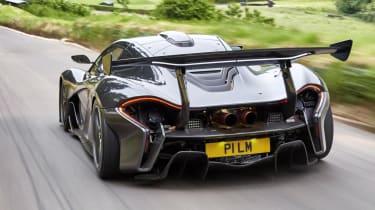 With almost 800bhp coming from its 4.0-litre V8 and a further 200bhp provided by electric motors, the Lanzante-fettled McLaren P1 LM managed an incredible lap time of 6:43.22 with Kenny Bräck at the wheel; around four second quicker than McLaren’s own quoted time for the track-only P1 GTR.

Given the P1 LM’s road-going racing car mantra, the P1 LM that set the lap time proceeded to drive home from the Nürburgring back to the UK on public roads. The time was run on road-legal Pirelli Trofeo tyres, making best use of the LM’s weight-saving measures over even the standard P1 GTR. These included lightweight seats, titanium tailpipes and the removal of race parts like the air-jack system.

> McLaren P1 review - A worthy successor to the McLaren F1 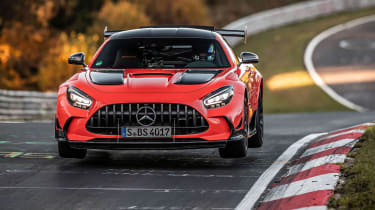 The most recent addition to the list is Mercedes-AMG’s GT Black Series, with its 6:43.616 lap the eighth fastest of all-time, but also the fastest lap ever achieved by a road-legal production car. Piloted by GT3 driver Maro Engel, the Black Series was fitted with a set of road-legal Michelin Pilot Sport Cup 2 R MO tyres developed specifically for the Black Series, and had its standard aero setup tweaked to suit the challenging conditions of the Nürburgring, knocking the Aventador SVJ off the top spot as the world’s fastest production car.

The GT Black Series features a complete overhaul over the ordinary GT. Not only does its 4-litre V8 now produce 720bhp and 590lb ft of torque, it’s biggest transformation has been the fitment of a flat-plane crank, dramatically changing the V8’s characteristics. As you’d expect, a number of weight saving measures and chassis tweaks are also part of the package. 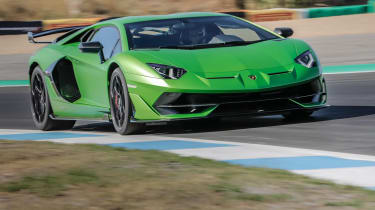 Sitting just 1.3sec behind the AMG is Lamborghini’s Aventador SVJ, with the marque’s factory driver Marco Mapelli lapping the circuit in 6:44.97 in July 2018.

Powered with a 760bhp output from its 6.5-litre naturally-aspirated V12, the SVJ is more powerful than the limited-run Aventador SV, but also features an array of changes elsewhere that also contribute to its improved performance. Most notable is ALA 2.0, a revised version of the aerodynamics system first seen on the Huracan Performante, said to increase downforce by 40% over the SV. 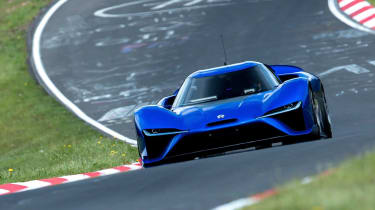 The Chinese-built NIO EP9 is a pure electric, 1341bhp Le Mans-inspired hypercar which set a blistering time of 6:45.9 with British Le Mans driver Peter Dumbreck at the helm. Though this does put it in tenth place overall, it did briefly hold the title of fastest road-legal car around the circuit – although the NIO EP9 still has never officially ever reached the road.

A previous attempt saw the EP9 return a 7:05.1sec lap, but with bad weather on the day it was this second run that broke its original time by a considerable 19 seconds.