Compared to its rivals, the Swift Sport feels old school. It’s small, is powered by a naturally aspirated engine that likes to be revved and, most noticeably, it’s surprisingly pliant. As such, cracks, bumps and dips in the road switch from being features to avoid to becoming aspects over which to make up time.

Follow a more powerful sports car along a broken B-road and it’ll spend its time weaving and braking around road imperfections, the driver wincing at the prospect of buckling a wheel, but in the Swift, you can simply breeze along.

The suspension’s pliancy isn’t the result of some complex racing dampers, but rather the outcome of a well-judged setup for Britain’s cambered and lumpy B-roads. Admittedly, it’s a little softer than hotter stuff – evident as you brake hard into a corner and the nose dives – but on the road the more communicative suspension serves as a useful tool in understanding how close you are to the car’s limit. Firmer cars can spit you off the road, feeling skittish over road imperfections; the Swift just soaks everything up. 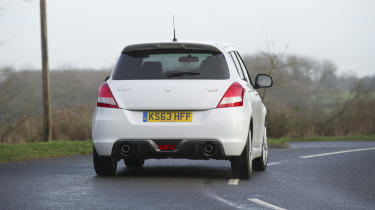 There’s no denying it, though – you wouldn’t see which way a Ford Fiesta ST had gone after a few miles. The Swift’s softer setup slightly delays the car’s responses to steering inputs. The steering is light, too, which doesn’t inspire much confidence initially, but once you learn to trust its consistency, the lack of weight seems to add to the car’s sense of agility.

While on paper it might not appear much of a match for true hot hatches, as a package, the less powerful Swift Sport offers unique thrills of its own.