The Suzuki Swift Sport SZ-R is a black and red hued special edition limited to 100 cars. We drive it 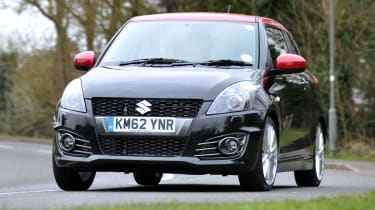 The Suzuki Swift Sport SZ-R is a very alliterative special edition of the titchy Japanese hot hatchback. It’s priced at £14,249 – £500 more than the standard Swift Sport.

As befits a relatively small price increase, the changes are purely cosmetic. Two existing Swift Sport colour options – Cosmic Black and Ablaze Red – are combined in a two-tone design, the roof, mirrors and rear spoiler factory painted in the latter. There are also new floor mats and a different gearknob, as well as a UK-fitted kick-plate decal that celebrates which of the 100 SZ-Rs you’ve bought.

Underneath, then, it’s as you were. A modified version of the mk1 Swift Sport’s 1.6-litre naturally aspirated engine combines 134bhp and 118lb ft outputs with 44.1mpg and 147g/km economy numbers, driving the front wheels through a six-speed manual gearbox. The suspension comprises MacPherson struts at the front and a torsion beam at the rear.What’s it like to drive?

It drives just like its base car, but the SZ-R’s arrival is a good chance to reappraise the Swift Sport. While the new crop of small hot hatches begins to embrace twin-clutch gearboxes and all manner of driving mode adjustability (the Renault Clio 200 Turbo being the chief culprit), the Swift Sport is a car defined by its simplicity.

Its engine requires revs to give its all – maximum shove arriving at a buzzy 6900rpm – and its vivacious nature and lovely, satisfying gearchange mean you revel in keeping the Swift in its sweet spot. And with a well-spaced set of gear ratios (plus the sixth gear its predecessor lacked), it’s relatively refined when you just need to get somewhere calmly.

Not that you’ll want to often - the Swift is cracking fun. If you know its forerunner well, it feels rather more grown up at first, but its impressively capable damping and added poise make it a more accomplished and predictable car to drive enthusiastically. There’s just one other new car that comes close for laughs below £15,000…

Spec-for-spec, the Swift Sport is nigh on covered by the Renaultsport Twingo 133, the little French car posting the same torque and 0-62mph figures while possessing 3bhp less with 5kg more to shift. Priced from £13,765 with similar levels of equipment (though the option of a stiffer Cup chassis), it’s not as refined as the Suzuki. Our detailed twin test of the two is here.Anything else I need to know?

The Suzuki Swift Sport SZ-R is a UK-only special edition, with 100 cars catering for those craving similar visual verve to the smaller-engined Swift Attitude. And if you don’t like black or red, the standard Sport can be painted silver, white or blue, too…