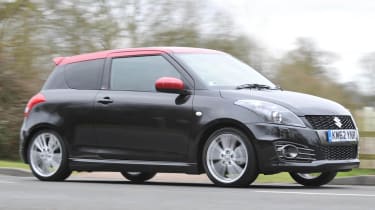 Suzuki has confirmed more details of its limited edition Swift Sport SZ-R. Just 100 examples of the car will be built, but will only feature cosmetic upgrades, rather than improvements to the Swift’s performance. This is no bad thing though, as the standard Swift Sport beat the Renaultsport Twingo 133 Cup in evo’s recent twin test. Underneath, the SZ-R is unchanged from the standard Swift, which means a 134bhp 1.6-litre naturally aspirated petrol engine and a 0-62mph time of 8.7sec. Suzuki says it also returns 44.1mpg on a combined cycle. The SZ-R is finished in Cosmic Black with a contrasting red roof, rear spoiler and door mirrors. Inside, all 100 cars produced will feature uniquely numbered door sills and more red accents on the gear knob and carpets. Like the standard car, the SZ-R is generously equipped, with automatic air conditioning, cruise control, Bluetooth and HID projector headlights. The Suzuki Swift Sport SZ-R is available from March 1 2013 and costs £14,249, £500 more than the standard car.