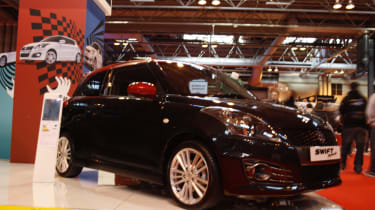 Suzuki unveiled a special-edition version of its Swift Sport at the 2013 Autosport International show at Birmingham’s NEC. Called the SZ-R, the car is mechanically identical to the existing model, meaning the 134bhp and 118lb ft of the 1.6-litre four-cylinder engine remain unchanged, as do the 0-60mph time of 8.7sec and the top speed of 121mph. But the SZ-R carries a number of visual tweaks, with contrasting two-tone paint (the second tone carried on the roof and the door mirrors), floor mats as standard and some minor trim changes in the interior. It helps keep the Swift competitive against more customisable rivals from Mini and Renaultsport. The SZ-R is limited to 100 cars, each of which will be numbered inside. Suzuki will confirm the pricing of the machines in February, but it is expected to command no more than a £750 premium on the standard mk2 Swift Sport’s £13,499 asking price.