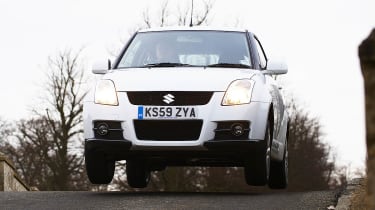 ‘We need something dramatic that graphically shows the car’s characteristics.’ That was art director Paul Lang’s instruction for the shot that would introduce our Swift new long-termer (right). It had to be a jump, then. Nothing sums ups the Suzuki Swift Sport more than a leap for joy. At £12,515 it may be the cheapest new car in our car park, and it may have only 123bhp, but everyone who has driven it so far has returned with a smile on their face. It’s an infectious little thing, this Swift, and despite being a bit long in the tooth (the Sport was launched in 2006), we couldn’t resist an opportunity to run one again. It’s honest and gets the basics right, from the brilliant seats to the rifle-bolt gearshift that’s a match for the Civic Type-R. And, as I’ve discovered, the springs and dampers perfectly control low-orbit landings, too. It’s gonna be fun. Roger Green