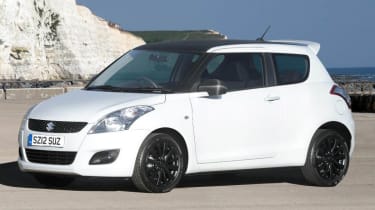 What is it? The Suzuki Swift Attitude. It looks rather like the 134bhp Swift Sport, but its stubby little bonnet houses a more modest (and insurance friendly) 93bhp 1.2-litre petrol engine. The Swift Attitude costs £10,750 as a three-door, £11,220 as a five-door. Technical highlights? This is a fairly simple car; a titchy supermini with a 1.2-litre four-pot driving its front wheels, via a five-speed manual gearbox. Its engine boasts variable intake and exhaust valve timing, and combines 93bhp and 87lb ft outputs with 56.5mpg and just 116g/km of CO2 emissions. The latter figure is impressive for a naturally aspirated petrol engine, and ensures UK car tax is free for the first year, and just £30 annually after that. The Swift Attitude boasts all sorts of equipment, with seven airbags, ESP, air con, 16in alloy wheels and carbonfibre effect for the roof and door mirrors; Suzuki’s target being to make a well specced hot hatch lookalike that can be run on a small budget. What’s it like to drive? Less hot hatch-like than it looks, though that’s not the end of the story. The hallmarks of a small, cheap supermini are present and correct: overly light steering, unprogressive brake feel, a bouncy ride. But with an unfailingly enthusiastic (and very rev-happy) little engine under its bonnet, you can’t fail to have fun, and the Swift’s light’n’easy controls gel together and make a car you’ll happily drive on its doorhandles, having a good giggle in the process. Body control and grip levels impress for a car wearing no performance badges, though the latter drops notably when the roads are wet. With the Swift weighing little over a ton, its modest power output isn’t a huge problem. A 12.3sec ‘sprint’ to 62mph and 103mph top speed are hardly the stuff of legend, but if you’re willing to use the full rev range, experiencing a rorty/intrusive engine note (depending on your viewpoint) in the process, you’ll have no issue keeping up with traffic or maintaining momentum on an interesting back road. How does it compare? The only rivals offering similar fun in standard trim are the Ford Fiesta 1.25 (81bhp, £10,395), Mini One 1.6 (97bhp, £13,460) and Mazda 2 1.5 (101bhp, £12,995), and they’re more expensive and/or not as lavishly equipped. Suzuki’s most potent Swift – the 134bhp, 1.6-engined Sport – is one of our favourite hot hatches and costs £13,499, sits in insurance group 19 (compared to the Attitude’s 9E) and consumes and emits 44.1mpg and 147g/km of CO2 respectively. Anything else I need to know? Just 500 Swift Attitudes will be made, and they’re all ‘Superior White’ in hue.

As if the £2m Huayra BC wasn't enough, the Italian marque has unveiled yet another limited-run hardcore hypercar
Visit/porsche/boxster/202234/porsche-boxster-gts-40-2020-review-as-good-as-it-gets

The 718 Porsche Boxster GTS has ditched the four-pot for the Cayman GT4's six, and the results are as good as we were hoping
Visit/hyundai/201819/hyundai-i30-fastback-n-versus-the-nurburgring