The Skoda Rapid's identical twin offers cheap, honest motoring. But is the SEAT Toledo any good to drive? 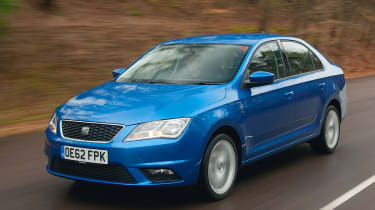 One of 2013’s stand-out minicabs, on first impressions. The SEAT Toledo is a twin sister of the Skoda Rapid, with the exact same mechanical package and the pair’s design distinguished by little more than badges. It offers what salesmen like to call a lot of car for the money, with lots of space and good standard equipment. But can it muster any evoness?

‘Highlights’ is overplaying this one. The Toledo/Rapid is based on older-tech components (read: cheaper) than VW Group’s new, world-conquering MQB platform. It draws its suspension from both the previous Octavia and the smaller Fabia, using a low-tech torsion beam rear axle. The range of basic, economical engines goes from a naturally aspirated three-cylinder 1.2 unlikely to pass muster for even mini-cabbing, through two turbocharged 1.2s to a range-topping (for now) 120bhp turbo 1.4. Diesels are likely to make up the majority of sales across Europe, though – with the 104bhp 1.6 TDI.

Let’s start by saying there’s a fundamental honesty to the way the Toledo does its thing. It’s not trying to be anything more than it is - simple, rugged and sensible.

None of which alters the fact that, dynamically, it feels about a decade off the pace. The ride never settles down on rougher road surfaces, with an underdamped layer of float that limits confidence and is likely to turn any passengers green. The steering feels too springy, with its over-light electric assistance masking any messages from the front end. Not that this is a huge issue given that the Toledo’s repertoire is limited to unremitting understeer at the limit. Fun, it’s not.

The 1.6-litre diesel engine has torque aplenty and works with a five-speed gearbox with stratospheric gearing to deliver quiet motorway cruising; 75mph is just under 2000rpm in top. But there’s no point trying to work the engine harder than its default plod; there’s no performance to find.

On all the sensible criteria, very well – the Toledo is bigger than a Golf and cheaper than a mid-spec Polo. But in terms of evo-ness, it’s not even on the board. It will be interesting to see if the almost inevitable FR version manages to improve the lacklustre driving experience in any way.

Although the Toledo looks like a saloon it’s actually a hatchback, with a vast 550-litre boot lurking under it. The tall gearing produces impressive economy – we saw 50mpg under hard use and 60mpg when cruising.