The new Skoda Rapid is set to take the company's value proposition to whole new levels - but is it any good to drive? 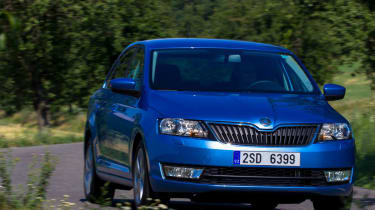 Possibly the most sensible car to be launched this year. The new Rapid slots into the Skoda range between the Fabia and Octavia – although it’s pretty much as long as the current Octavia. It looks like a saloon but it’s actually a hatchback, with a sizeable boot and a spacious cabin; power comes from a familiar range of VW group petrol and diesel engines. It’s set to be sold (in slightly different guises) in Europe, south America, China, Russia and India.

Although prices haven’t been officially announced yet we’re promised that it will undercut all major rivals when it goes on sale in the UK in December with lead-in pricing of around £13,000. Or, put another way, more-than-Golf space for Polo money.

You’d have to look long and hard to find anything innovative about the Rapid’s mechanical layout, which draws heavily from the VW partsbin. It’s not sitting on VW’s clever new modular ‘MQB’ platform, rather a mix of what we’re told are ‘established’ components – read Fabia and Polo parts – with McPherson struts at the front and an old-fashioned twist axle at the rear.

The basic engine will be a 1.2-litre three-cylinder petrol with just 73bhp and a leisurely 13.9-second 0-62mph time, above that there are two turbocharged 1.2-litre TSI fours (in 85bhp and 103bhp states of tune) and – at the top of the range – a 1.4-litre TSI with 120bhp, the only model in the launch range capable of hitting 62mph from rest in under 10 seconds (just). There are also two 1.6-litre TDI diesels for real thrill seekers.

What’s really clever about the Rapid is the way it’s been engineered down to a price without feeling cheap or nasty: the cabin plastics are on a par with anything you’d find from Ford or Vauxhall and the design has a definite resemblance to the 3-series from some angles.

We start out in the top-spec 1.4-litre TSI – which is only available with the seven-speed DSG twin-clutch gearbox. It’s a big disappointment: the engine sounds course and unrefined when worked hard and the ride has a heaving, unsettled motion that discourages fast progress. What discourages it even more is finding the first corner and discovering what can only be described as Old Testament understeer – the last car I drove that felt this attracted to the scenery was a 15-year old Ford Orion shod with £15 ‘Ditchfinders.’

Fortunately the 103bhp TSI that we also drive is far nicer. It’s 60kg lighter and it feels it, with more front end grip and a workable handling balance. On the hatchback temperature scale it’s barely tepid, but the little engine enjoys revving and delivers decent enough performance and the power steering gives a reasonable impression of when the front end is reaching its still modest limits. It rides better than the 1.4, but the simple rear axle puts an edge onto mid-corner bumps that you wouldn’t experience in something with a fully independent back end.

Other stuff? There’s loads of room in the back – full-sized blokes can sit behind each other – and the boot is predictably massive. This thing is going to make an awesome minicab.

Until Skoda reveals the full range of pricing it’s hard to tell just where the Rapid will fit into the world, although the company assures us that it will be ‘class leading’ when It comes to cost. Seeing as the most basic Volkswagen Jetta costs £17,540 in the UK – albeit fitted with the same engine that powers the range-topping Rapid – the outline ‘£13,000-ish’ pricing suggests it will be a bit of a bargain. Standard spec will include six airbags, ESP and aircon.

The Rapid is long, but narrow – to help it out in developing world markets where roads are smaller and tighter. Chinese and Indian versions will be slightly different, but will share the same mechanical package.

There’s no official word on a vRS version, but a Skoda insider admitted it would ‘be odd’ not to have one between the Fabia vRS and the Octavia vRS. We’ll also see an estate version, and possibly a three-door coupe.

The next Octavia is going to be bigger, hence the Rapid being nearly the same size as the current one.