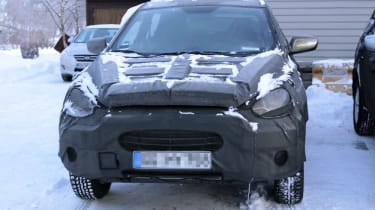 These are the early spy-shots of the next generation Hyundai Tucson as it was undergoing durability testing in the northern part of Scandinavia. Production for the Korean market is expected to start in the last quarter of 2009, with sales in the States and Europe starting in mid-2010 – likely making the all-new Tucson a 2011 model year offering in North America. Sources are saying to expect only 4-cylinder powerplants, including a turbocharged model after the initial launch. While insiders told up they had some pretty modern designs on the drawing boards, the Hyundai decision makers went for a traditional, yet new (and 'safe') look for the small crossover.