Subaru pulls the wraps off its ultimate Japanese market Impreza, the WRX STI S206 and its special Nurburgring edition 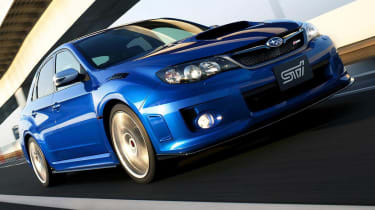 Subaru will be displaying its new limited edition Impreza WRX STI ‘S206’ at this week’s 2011 Tokyo motor show. The more focused Impreza has gone straight on sale in Japan, but won’t make it to the UK. The car now makes 316bhp and 318lb ft from its 2.0-litre, four-cylinder boxer engine. The power increase over the standard car comes about thanks to a new twin-scroll turbocharger, STI-tweaked ECU and sports muffler. Subaru hasn’t yet confirmed any performance figures for the car but expect enhancements in drivability thanks to extra low-down and mid-range torque. The S206 also features an all-new suspension set-up over the standard car, including Bilstein shocks and STI coil springs. In addition to this is an STI-designed front tower strut brace and flexible draw stifferner which Subaru claims will enhance straight line performance whilst allowing the driver to make ‘precise and quick’ mid-corner adjustments. As well as the suspension upgrades the car features new BBS 19in wheels and performance orientated Michelin Pilot Super Sport tyres. As far as aesthetic changes go there’s a new grille, spoiler and lower bumper at the front, improving aerodynamics, whilst at the rear, the trademark rear wing has been removed. Inside there’s Alcantara trim and Recaro racing bucket seats. A special edition of the special edition is also being offered by Subaru. To commemorate Subaru’s class win at the Nurburgring 24 Hours this year, the ‘NBR Challenge Package Edition’ (pictured in white, right) gets a carbonfibre roof and rear spoiler. Only 300 S206s will be offered by Subaru, 100 of them being the NBR Edition, and those have already sold out.