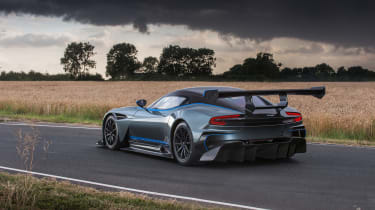 Nothing prepares you for your first up-close meeting with the Aston Martin Vulcan. Pictures only tell you so much, and even video fails to communicate the heart-pounding presence of this huge and hugely valuable machine.

Is it an indulgence? Of course. That’s rather the point of these millionaires’ playthings. Have I questioned the point of these ‘can’t drive them on the road, but can’t race them, either’ hypercars? Yes, many times. Yet no matter how sniffy you are about their reason for being, walk up to the Vulcan and all cynicism melts away. 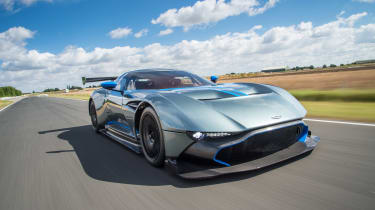 Rolling out onto the tarmac at the Blyton Park circuit, the gravity of the situation was never in doubt.

‘Awesome’ is an over-used term, but it’s a description that fits the Vulcan to a tee. The price tag (£2.2m), the power output (820bhp when fully lit), the rarity (just 24 were built) and the downforce (in excess of that 1350kg kerb weight) make for a truly remarkable machine. One blessed with beautifully resolved styling and exemplary fit-and-finish but fused with the purity of race-proven hardware and propelled by an engine from the gods.

Not your traditional track-car, the Vulcan has a front-mounted engine mounted within the carbonfibre tub that is crafted using the same mould as the one from the One-77. Power goes to the rear wheels via a 6-speed Xtrac sequential gearbox. There’s a limited-slip differential and a magnesium torque tube with a carbon propeller shaft. Carbon ceramic discs of 380mm at the front and 360mm at the rear do the stopping. 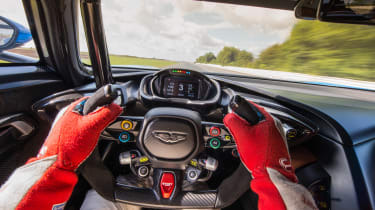 The suspension is of the F1-style pushrod persuasion aided by adjustable dampers. You can then further tune the set-up with adjustable anti-roll bars and variable traction control. Weight has been kept to just 1350kg – 150kg less than the One-77 with which it shares its structure.

The specs are impressive but the more remarkable thing about the Vulcan is that this is no baby-eating monster for professional drivers only. Quite the opposite, in fact. Terrifying your best customers is bad for business, so the Vulcan was built around a carefully structured driver-training programme that brings each customer up to a level where they can confidently enjoy the performance. The car itself has been set-up to be user-friendly, though I’m struggling to believe anything this big, with this much power, grip and downforce, can be a pussycat.

The cockpit is fabulous but intimidating, as you sit a long way back in the chassis. The yoke-type wheel is a work of art and feels as good as it looks. There are three power modes for the 7.0-litre V12 engine – 550bhp, 675 and the full 820. As Darren Turner, the works driver who helped develop this car, had already warmed the tyres for us and time is marching on, there doesn’t seem any point mucking about: 820bhp it is!

The motor starts almost instantaneously, settling into a fast, urgent race-car idle. The Xtrac sequential ’box is pretty much straight from the GTE/GT3 Vantage, so you only need to use the clutch when pulling away and coming to a halt. It’s a hefty thing to depress. The car pulses with the engine’s energy and there’s plenty of chatter from the transmission and diff at low speeds, but once its aquiline nose is pointed out onto the track, it comes alive. 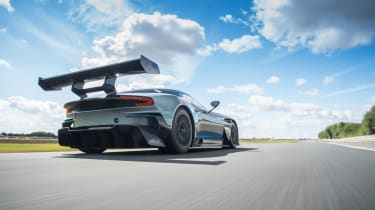 For the first few laps, you’re overwhelmed by the magnificence of it all. The engine is otherworldly, with epic reach and a sensational serrated soundtrack. The six-speed transmission shifts with the snap of a whipcrack, each pull on the deliciously tactile paddles punching up or down with fabulous immediacy. The brakes – gargantuan carbon-ceramic discs gripped by six-piston calipers – have tremendous pedal feel and progression, which you absolutely wouldn’t expect in a car so reliant on racing hardware. Right from the off, the car feels on your side.

As you begin to gain confidence, your speed builds naturally. There’s enormous mechanical grip, supported by a traction-control system that can be wound in or out according to the conditions and skill of the driver. It’s reassuring to know it’s there, likewise the ABS, which can also be adjusted. As we’ll learn as the test continues, the electronics are supremely subtle – genuine aids to your speed and enjoyment, and certainly not systems to be disabled.

The real genius of the Vulcan reveals itself when the magical sensation of downforce comes into play. Aston has been very clever in melding mechanical and aerodynamic grip so that the wings are working well before you breach the Michelin slicks’ hold of the tarmac. Consequently, when you summon the spuds to really lean on the front end through Blyton’s rapid Port Froid esses, the wings and underfloor aero already have you safely in their embrace.

As a result, the Vulcan doesn’t force you to make a leap of faith in the way high-downforce racing cars tend to. Instead, as you work the car harder, you feel the nose just start to push wide of your chosen line. Not by much, but just enough to let you know you’re properly on it. 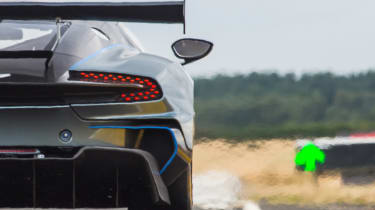 Slower corners need more respect, as the tail will loosen under the onslaught of all the torque. That said, the electronics will take the sting out of it if you’ve got them dialled in, allowing you to apply small amounts of corrective lock and stay on the power before they truly intervene.

Charging down Blyton Park’s straight (we run without the midway chicane) is an unbelievable sensation. One that assaults all your senses in one great Technicolor surround-sound blur. Braking is best done with your left foot, but it’s possible to brake with your right if you prefer. You wouldn’t believe how hard you can hit the middle pedal, or how you can dive at the apex with the brakes still applied. This car compresses braking areas like crushing an empty Coke can, with each interlinking straight devoured in just a few lunges through the 8000rpm rev range. And those high-speed corners? Well, they’re the Class-A hit.

24 owners paid the £2.2m price tag to take ownership of an Aston Martin Vulcan. Alternatives aren’t thick on the ground but those that do exist are pulled from the hyper-exclusive ranks of the track-only hypercars. Models like the McLaren P1 GTR and the Ferrari LaFerrari FXXK would be on the shortlist, or maybe a Lamborghini Huracan Super Trofeo.

evo has driven some epic kit around the Blyton Park circuit, but nothing comes close to the Vulcan for drama, involvement or entertainment. It’s a ludicrous thing, but it distils the best bits of driving a race car and an exotic supercar into one remarkable experience. If you could, you absolutely would.