Gemballa reveals details of new hypercar – without a battery in sight 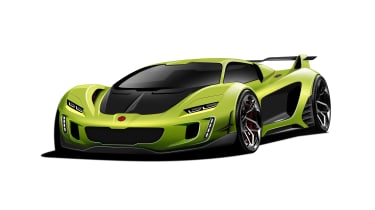 Resolute to secure a rung on the hypercar ladder for itself, German-based bespoke manufacturer Gemballa has revealed its plans to release its own hypercar. Unlike so many of the hypercar upstarts announced over the last couple years, Gemballa’s as-yet-unnamed hypercar will feature an internal combustion engine without an electric motor or lithium ion battery in sight.

Specific details remain vague, but Gemballa has revealed a set of benchmarks it will be working to meet, with proposed 0-62mph acceleration times of under 2.5sec, and 124mph in 6.5sec. The powertrain it intends on using to facilitate these figures is also suitably vague, although the company has alluded to the possible use of a manual transmission.

Gemballa has also released some early design sketches, revealing its mid-engined layout judging by the cab-forward profile and long tail. The overall aesthetic does have whispers of McLaren about it, and Gemballa’s experience with the British supercar manufacturer might form a possible connection between the two, but for the moment this is just speculation.

Despite the brand’s quite specific rhetoric of this being “one of the last pure sports cars”, a hybridised version is said to be in the works too, which might appear some time after this initial version.

An early prototype version is due to be revealed in early 2020, with the company now taking paid deposits in order to complete the development process, but the expected price point and date of delivery remain fluid at this point.