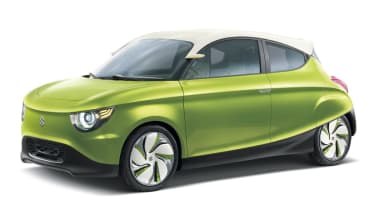 Suzukis latest concept, the lightweight and slippery G70 is destined for the Geneva motor show . The company has focussed its efforts on making this as light as possible, just 730kg, with what Suzuki describe as 'elaborated dynamics'. The Japanese company has also worked hard on reducing the aerodynamic drag, and claims the G70 is is at least 10 per cent more aerodynamic than the previous model.

This is not a production-ready concept, but it does demonstrate a new vision for the Suzuki's new direction for its next generation compact car. As a result of the low weight and efficient engines, CO2 emissions could be as low as 70g/km.

Also on show will be the new Swift range-extender, Suzuki's latest development in hybrid technology. First shown at the Geneva show in 2010, Suzuki has worked hard on developing the system, now more than 100 per cent more efficient than in 2010.

The Jaguar Project 8 is a 200mph marvel of engineering designed with one purpose in mind: to deliver the thrill of driving. We put some lucky evo read…
Visit/features/17660/the-best-four-cylinder-engines-ever-we-pick-our-favourites

Nissan’s future plans have been laid out, and they include a new Z sports car
Skip to HeaderSkip to Content